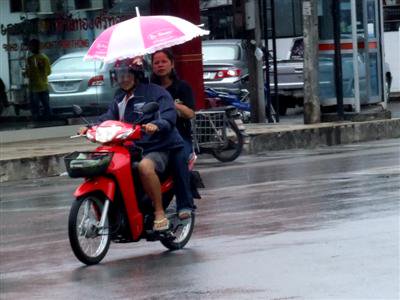 PHUKET CITY: Recent heavy rainfall in Phuket indicates that the annual transition from the dry season to the rainy season is well underway – much to the relief of water supply officials.

Although many feel the monsoon rains have arrived early this year, an officer with the the Southern Meteorological Center (MET) in Mai Khao said the arrival of the monsoon at this time of year is not statistically that unusual.

Reliable rainfall statistics for Phuket date back to 1961, when monitoring began at both the Phuket City and Airport monitoring stations.

“Winds from the Andaman Sea are now bringing moist air and plenty of rain to this island. We can expect plenty of rainfall until around October, when the transition back to the dry season usually begins,” he said.

December, January and February are statistically the driest months in Phuket City. They also coincide with the high season for tourism, when demand for water is highest. In February and early March, several parts of the island were already experiencing drought conditions and having to rely on water brought in by trucks.

Rainfall in Phuket City in January, February and thus far in March were recorded as 4mm, 3mm and 108mm respectively. These indicate a rather dry January and February followed by a very wet March

Based on data collected over a 30-year period, average rainfall at the Phuket City station for the three months was 22mm in January, 30mm in February and 59mm for all of March.

Rainfall at Phuket International Airport this year was 13mm (January), 3mm (February) and a whopping 337mm as of March 25.

Average rainfall amounts at the airport over a 30-year period are 36mm (January), 33mm (February) and 74mm for all of March, according to MET statistics.

Steen Jansen, a Dane who records rainfall data at his hillside home in Patong, said 173 mm of rain had fallen there so far this March, well above the monthly average of 56mm since he started monitoring rainfall in 1998.

The last serious drought in Phuket came in 2004, when there were only trace amounts of rain over the first three months, and wells in some coastal areas were contaminated with saltwater from the tsunami.

Don Smith, who founded the company Rainwater Solutions in 2001, told the Gazette that with rising fuel costs and clean water becoming more scarce it makes sense now more than ever to collect and use rainwater.

His company, which employs 14 people, fits homes with continuous guttering that allows them to collect and store rainwater. The business continues to expand and is now using materials produced in Thailand that previously had to be imported, he says.