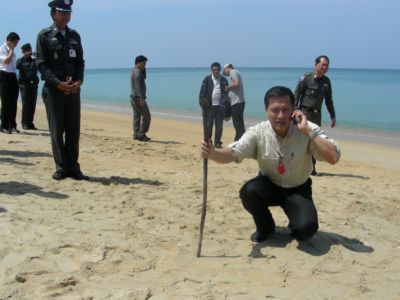 MAI KHAO: Police investigating the murder of Swedish tourist Hanna Charlotta Backlund, 26, whose body was found at Mai Khao Beach on Saturday morning, are waiting to speak to a key person before moving to arrest their prime suspect in the case, Phuket Police Deputy Commander Col Paween Pongsirin told the Gazette today.

“We have received important information from villagers in the area. I can’t say anything more to the media at this moment,” he said.

Col Paween confirmed that yesterday police interviewed three men in connection with the murder. No arrests were made.

However, Col Paween did not confirm reports that the wounds inflicted on Hanna were made by a knife similar to those used by local fishermen.

Hanna had been staying at the Mai Khao Beach Resort with friend Emma Storman, who found her body 300 meters from the resort. According to police, the victim died from stab wounds to her neck and body.

Officers from the Crime Suppression Division from Bangkok arrived in Phuket this morning to assist with the investigation, which included questioning local residents.

“We have limited evidence from the murder scene because of the proximity to the sea. We are awaiting the results of DNA tests from Hanna’s body,” Tah Chat Chai Police Superintendent Pol Col Sakchai Limcharoen said.

A 100,000-baht reward is being offered by local businesses for anyone who comes forward with information that leads to finding those responsible for Hanna’s death.

Tourism and Sports Minister Weerasak Kowsurat arrived in Phuket today to visit the murder scene and meet with Emma, who is being treated for shock at Phuket International Hospital.

No progress in Hanna murder investigation