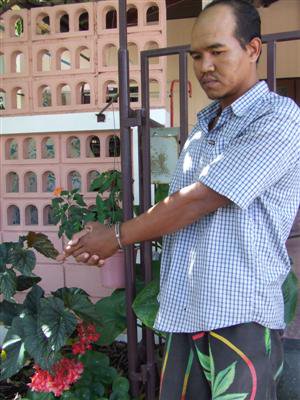 KATHU, PHUKET: Tung Tong Police have arrested a man suspected of the fatal stabbing of a 62-year-old moneylender almost two years ago.

Manop Khobwet, 33, was drinking with friends at his house in tambon Maifard in Trang province when police arrived and took him into custody at around 6pm on March 23.

The victim, Kajorn “Ko Jorn” Somnam, died in his home in the Bangtong Village housing estate in May 2007. He was stabbed twice, once in the neck and once in the torso.

A statement released to the press by Tung Tong Police said that Mr Manop had worked for Mr Kajorn as a rubber tapper.

Mr Manop confessed to carrying out the killing in a fit of jealous rage after he found his wife at Mr Kajorn’s house wearing nothing but a towel.

Mr Manop also confessed to trying to steal a land title deed he had used as collateral to secure a loan from Mr Kajorn, according to the statement.

Mr Kajorn’s fourth son told the Gazette he believed the murder was about the money Mr Manop owed to his father and not about jealousy.

“I don’t believe a love triangle was the motive. Instead I believe he killed my dad because he wanted to get the title deed back to clear his debt,” he said.

“He searched for the title deed in my dad’s house instead of running away after the killing. It seems that he was focused upon finding the document because they found his blood-stained finger prints on papers in the drawers. Fortunately the document was underneath my dad’s bed,” he said.