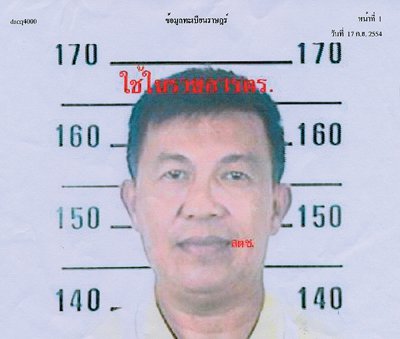 PHUKET: A career conman who claimed to be a high-ranking Department of Special Investigations (DSI) officer is on the run again after two decades of crime, arrests, womanizing and escaping justice.

Witchayut Pansampao, the alleged conman who masqueraded as a DSI officer to defraud people throughout the South, was arrested last month in Haad Yai but has gone missing after his release on bail.

Police believe he may be in Phuket, where he has a house with his wife, registered in his name.

Praphan Areebambat, an investigator with the Haad Yai District Police in Songkhla, identified the 57-year-old suspect as a resident of Singha Nakhon District in Songkhla.

Witchayut was picked up by officers as he was enjoying a bowl of khao tom (boiled rice) at a local restaurant in Haad Yai. He was wearing a T-shirt and shorts with a black jacket and badge identifying himself as a Department of Special Investigations (DSI) officer.

Arresting officers presented the suspect with a copy of an outstanding warrant on fraud charges issued by the Ranong Provincial Court for acts committed in Kraburi District, the province’s northernmost district sharing a long border with Burma.

A search of the suspect found him in possession of a fully-loaded .38 caliber pistol.

Officers escorted Witchayut to his Haad Yai hotel room where they found his real ID along with a picture business card identifying him as Pol Maj Gen Witsanupong Phummarin, an officer with the Justice Ministry’s DSI, the Thai equivalent of the FBI in the US.

Other evidence recovered included a variety of images of the suspect dressed as a police major general, ID cards identifying him as a member of the Phuket Police, mobile phones and birth control pills.

Witchayut continued to tell officers he was a real DSI agent as he was taken to Haad Yai Police headquarters. He claimed that he had been working in Phuket and was visiting family in Songkhla, where he was born.

After spending the night in a police jail cell, he was granted bail under the promise he would return on September 21 for additional questioning, Lt Col Prapan said.

He has not been seen since and is likely on the run, he added.

“Now I am processing documents to charge him with carrying a firearm in public, but we need to check the gun licensing center in Nakhon Sawan to see whether the pistol was legally registered. When all the evidence has been collected we will forward the case file to the public prosecutor in Haad Yai. In the meantime we will issue a summons for him to appear for questioning. If he does not appear, we will apply for an arrest warrant,” said Lt Col Prapan.

The police would not seek charges of impersonating a police officer because the suspect was not using the disguise to defraud people at the time of arrest, he said.

He was also a womanizer of sorts, police said.

“We think he used the ID to impress women and get them to sleep with him, then he probably used the birth control pills to keep them from getting pregnant,” he added.

However, his station did not call Haad Yai Police with instructions to hold the suspect and assist in his transfer to Ranong to face court charges for fraud, he said.

Subsequent investigation by Haad Yai Police revealed that multiple arrest warrants had been issued for Wichaiyut by courts in Surat Thani as well as Ranong, Lt Col Prapan said.

In an effort to learn more, the Gazette contacted Police Region 8 Headquarters in Surat Thani, which is responsible for the upper-south region.

Investigator Mechai Nokkaew said the elusive Witchayut has been arrested “more than 10 times” over the past two decades.

One of the arrests was made in Phuket, but the case was dropped in 1993 when the victim chose to mediate a settlement.

“He has been defrauding people for about twenty years. After he serves his prison sentences, he goes back out and does it again,” he said.

“He works with other gang members to defraud people. They rent a room and invite their mark to discuss a business proposal, then ask them if they would like to have a gambling session. People who fall into this trap invariably lose because the gang members cheat,” he said.

“When caught and convicted, penalties are typically quite light. He might spend a year in prison, while completely avoiding incarceration is some cases through the mediation process,” he said.

Police records show that Witchaiyut and collaborators defrauded one party out of two million baht in Surat Thani in 1998, he said.

Victims typically get less than half their money back through the mediation process, he said.

“Witchaiyut has been defrauding people for 20 years, ostensibly so that he could afford to educate his child through to master’s degree level,” he said.

“He always carries fake documents identifying himself as a government officer of some sort.

It was confirmed Witchayut Pansampao still had not been detained, the Phuket Gazette was informed yesterday.