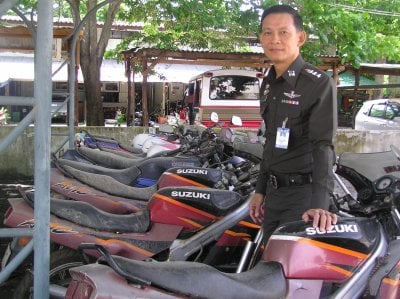 Col Paween told the Gazette last week that although cars and motorcycles are essential for police work, seven of the department’s 14 squad cars are no longer roadworthy or are currently being repaired.

He added that 20 of the station’s 60 bikes are inoperable.

“Our vehicles are too old – we have had them an average of five to seven years. Police vehicles are used 24 hours a day. We policemen get to take a rest, but our vehicles never do. They are used all day, every day, because we have so few of them,” he said.

The shortage is affecting the department’s work and is often the reason for delays in responding to calls, he said.

“At any given time we need to have some cars on traffic detail and others out on patrol. That doesn’t leave many for our duty officers to use when responding to calls,” he said.

Duty officer Pol Lt Thivakorn Kongpeth told the Gazette that the situation had become so bad that many officers had taken to calling the Kusoldharm Rescue Foundation and asking them for a lift to accident scenes.

“When I answer a call, I use my own personal vehicle – and have to pay for the gas myself,” he said.

Col Paween explained that getting funding for new vehicles from the Royal Thai Police headquarters in Bangkok was no easy task.

“They have 1,460 stations under their control, so it takes a long time to get approval for a budget,” he said.

He added that the Phuket Provincial Administration Organization (OrBorJor) showed little interest when asked to provide a 10-million-baht budget for new vehicles.

He said the department had since sought a smaller OrBorJor budget for leasing cars, as this would be less costly than buying them outright. The police are still waiting to see if this request will be granted.

After the tsunami, he noted, many government agencies in the area received donated cars, but not his, despite the fact that his men had had to work very hard after the tsunami and for months afterward, providing escorts for the many VIPs and foreign dignitaries who visited the island.

“People look to the police when they are in need, but when our vehicles break down we end up having to pay for repairs out of our own pockets. People always use our service, but how many of them think of the suffering of police?” he asked.