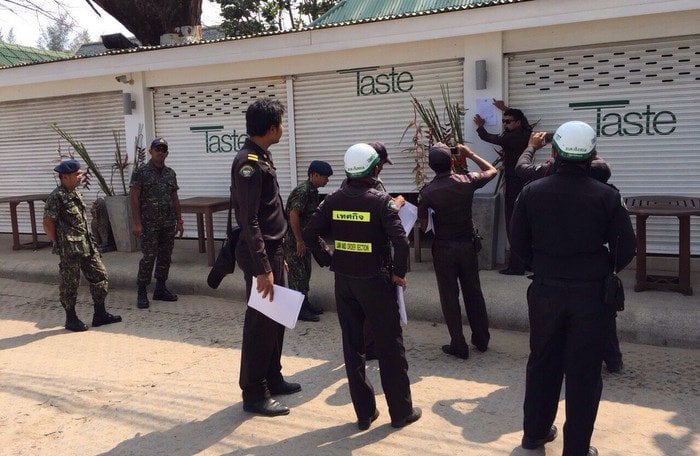 PHUKET: Police expect Chamroen Tipayapongtada, who will be the governor of Phuket as of October 1, to strongly back their efforts to evict a number of Surin Beach clubs and businesses that are allegedly encroached on public land.

“I don’t think it will take long once the new governor takes charge. He was previously a vice governor for the province and use to take very strong stances on issues concerning public land,” said Lt Col Rassada Kleungwong of the Cherng Talay Police. “I believe he will wrap this all up quickly.”

Mr Chamroen, however, was hesitant to make any comment on the matter when speaking with the Phuket Gazette yesterday morning.

“I’ve yet to take up my position as governor in Phuket. Currently, Governor Nisit Jansomwong is in charge. I think it might not be appropriate for me to voice my ideas about the island yet,” Mr Chamroen said. “I will be taking my position there on October 1, and will then be able to answer such questions.”

Lt Col Rassada explained that due to the size of the issue, the Cherng Talay Police were in the process of setting up a committee with officers from other stations throughout the island to develop a plan to be presented to Phuket Police Commander Patchara Boonyasit.

Eight businesses, including some of Phuket’s famous beach clubs, have cases already in court, while 31 businesses are still under investigation, Col Rassada said.

In March, several iconic beach clubs were among 39 businesses along the Surin beachfront boardwalk that were given eviction notices (story here).

The notices followed last year’s demolition of business structures on the west side of the boardwalk, which were deemed to be on public land (story here).