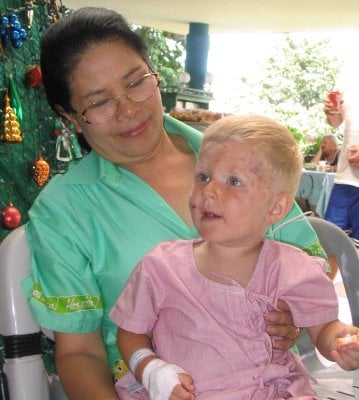 PHUKET CITY: As the hospitals on the island continue to receive people injured by yesterday’s tidal wave, the number of patients who have been separated from family or friends grows.

At Phuket International Hospital, a toddler boy was brought in by ambulance from Tai Muang, in Phang Nga, about 9 pm last night.

The boy had been rescued by a couple, but his parents have yet to be located.

Although the boy responded to questions in Swedish, and he is believed to be three years old, staff have no other information that might reunite him with his parents.

People who believe they have information on him or the location of his family are asked to contact Phuket International Hospital at Tel: 076-249400.

Similarly, notices have been posted at the hospital asking for any information that might locate Paul Giardino, a 16-year-old Australian suffering from Down’s syndrome.

Paul was separated from his parents, Joseph and Ivana, when the wave hit Patong Beach yesterday. They were having breakfast at the Patong Seaview Hotel when the surge crashed through the hotel restaurant.

In an effort to provide open phone lines for people who want to notify loved ones of their own or another’s well-being, telephones have been set up at Wachira Phuket Hospital and at the CAT Phuket headquarters on Phang Nga Rd, for people to make local and international calls free.