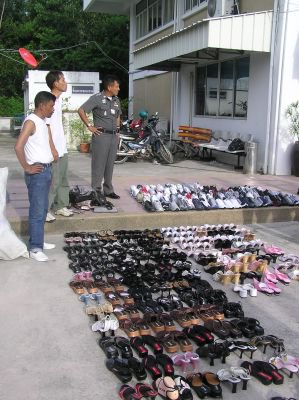 PATONG: Kathu Police seized about 1,000 pirate copies of designer shoes, handbags and clothing on Thursday afternoon and arrested one vendor. Undercover officers posing as customers bought a pair of sport shoes from a vendor operating along Thaweewong Road. She was identified as Pichamon Somji, 25, of Surat Thani. K. Pichamon was arrested and charged with selling goods in violation of copyright laws. All of her merchandise was seized. Police estimated the value of the haul at 500,000 baht. Among the brands imitated in her goods were Christian Dior, Gucci, Louis Vuitton, Puma and Nike. Police said the items were sourced in Bangkok and had been on sale in a shop along the beach road for about one week. Pol Col Chalit Thinthanee, Superintendent of Kathu Police, said the bust was in line with the government’s policy to rid Patong of counterfeit goods. “So far this this year we have made about 100 arrests and eliminated 80% to 90% of the trade in counterfeit goods,” he said. He admitted, however, that it would be difficult to eliminate the trade completely because small factories in China continue to churn out the phony items, which find a ready market in Thailand. “In this case, we found stickers on a ‘Dior’ box that read, ‘Made in China’,” he noted. He added that vendors had changed their marketing approach in response to police action. Rather than set up stalls, which are easy targets for officers, many vendors have switched to walking along the beach and peddling their wares directly to tourists. “We know some illegal vendors also use a delivery system similar to the one used in pizza home delivery. When the customer orders the goods, a phone call is made and the merchandise is delivered directly to the customer’s [hotel]. “We are keeping our eyes open and expect to arrest the people who are doing this some time soon,” Col Chalit said.