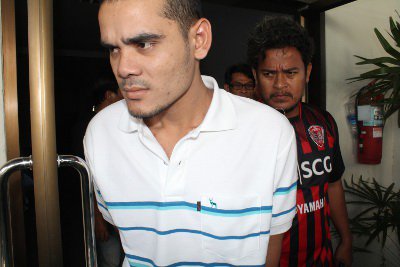 PHUKET: The three men arrested for the shooting murder of 55-year-old Sumittra Namfak in Phuket yesterday have denied the charges.

Ms Sumittra was shot in the head at close range at her home in Thung Thong, Phuket, yesterday afternoon.

Savit Jongruk 28, Aroon Patan 28, and Sanguan Phu-]ngern 26, were arrested at Tah Chat Chai police checkpoint yesterday as they were trying to leave the island.

Police stopped and searched the bronze-silver pickup they were travelling in following witness reports of a car matching that description being spotted at the scene of the crime.

The searched found one handgun and 20 pills of ya bah (methamphetamine) inside the vehicle .

All three men are registered as residents of Klong Thom in Krabi and reportedly work as farmers.

Ms Sumittra has since died in hospital from the gunshot wound to the head, police confirmed.

Investigating officers are now trying to contact Ms Sumittra’s foreign boyfriend and a Thai woman for questioning over the murder.

Pickups spin out of control on major Phuket road