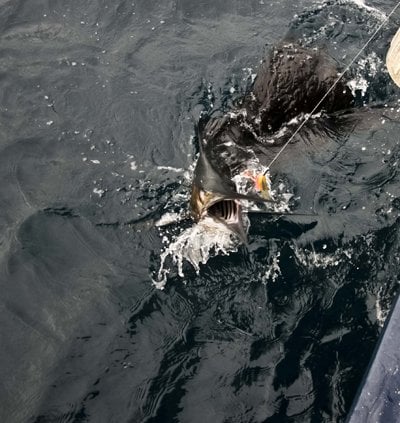 The Danish ‘Clean Team’ trailed by a minnow, which was required to catch ‘Team Captain Hook’ as the boats headed out under gray skies for the final day of competition.

Ian Tubby, captain of Thai Two On, implemented an all-or-nothing strategy, along with the Danish raiders, to try and reel in the leader and steamed to Koh Racha Yai for the big fish.

With the help of the sea gods, a bite finally arrived and a stunning Sailfish was snared, photographed and released.

Back on semi-dry land, at the Tamarind Bar, the all important ultimate weigh-in took place.

The event raised 73,000 baht for the Phuket Sunshine Village.

Click here to see more photographs of the event.

The Phuket International Sportfishing Tournament 2012 was proudly sponsored by the Phuket Gazette, PGTV and the nationally televised Phuket Today show on UBC/True Visions.

Phuket Today, co-produced by PGTV and MCOT World, will be providing coverage of this event. The half-hour show runs six times a day, seven days a week, on channels 99 & 59.