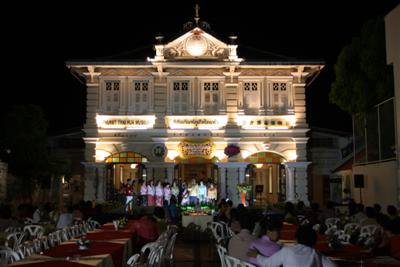 The TAT, Phuket City Municipality, the Thai Peranakan Association and the Old Phuket Town Club together held an event last week aimed at promoting Thalang Road as a cultural discovery route to celebrate Thai-Chinese culture on the island.

The event, titled ‘Recounting the history of Thai-Chinese immigrants in Phuket’, was opened by Phuket Governor Wichai Phraisa-ngop at 4pm on Saturday.

Many local people dressed in traditional Peranakan costumes for the ceremony, which took place at the Thalang-Thepkrasattri Intersection.

The Old Town has long been central to the Tourism Authority of Thailand (TAT)’s efforts to attract tourists to Phuket City.

The 36 member families of the Old Phuket Town Club opened their homes to the public for the day.

Thalang Road itself was closed to traffic, giving the crowds easy access to the residences.

The event finished with a party at the Thai Hua Museum on Krabi Road, attended by Gov Wichai and representatives of the organizations involved.