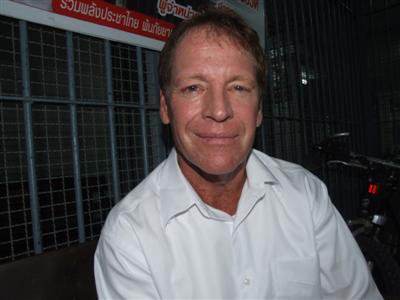 PHUKET CITY: A Canadian man who has lived in Phuket for over a decade has been arrested for working illegally in Thailand, a charge he claims stems from a dispute over maintenance fees with one of the co-owners of a condominium complex in which he owns five units.

Mr Nixon was earlier this month asked by Immigration officials to present himself for questioning on March 23.

After questioning by Immigration and Labor Department officials, he was escorted by Immigration police to Tah Chat Chai Police Station, where he was formally charged at around 1pm.

Mr Nixon, from Toronto, was detained in a cell for about three hours while his lawyer and police disputed the validity of the condominium chanote title deed he had brought with him to post police bail. The document was eventually accepted and Mr Nixon was released around 9pm.

Speaking to the Gazette from inside the jail cell, Mr Nixon explained that he started spending winters in Thailand about 20 years ago to escape the Canadian climate, and now owns five units at Blue Canyon. He has also been a member of the Blue Canyon Country Club since its inception in 1992.

He told the Gazette that he was not working in Phuket, but had merely been elected by fellow condo owners as their “juristic person” representative at an annual meeting. Serving as a condo owners’ representative is an unpaid position and does not constitute work, he maintains.

“I just serve as a safety net to protect the common interests of all the co-owners in our condo estate,” he said.

There are many foreigners on the island in similar positions, and to his knowledge none has ever been accused of working here illegally for this reason, he says.

Mr Nixon concedes that Thai labor law as it applies to foreigners is vague about what actually constitutes “work”, but he feels the authorities are selectively enforcing the law in his case at the behest of one of the condo co-owners who is in arrears on his maintenance fees.

Phuket Immigration admit to arresting Mr Nixon, but told the Gazette they could not give more details about the case until Lt Col Suparerk returns from a seminar in Bangkok.

Today, Mr Nixon spent all morning in a holding room at Phuket Provincial Court. He was finally allowed to leave the court at about 5pm, after he was formally charged for working without a work permit and his lawyer posted court bail.

“Does the local government really want to ask us to keep investing in properties and not allow us to sit on management committees? There is something strange about this. If Thai authorities don’t want foreign investors, I think they should just tell us clearly, as opposed to arresting us,” he said.

There are often cases in which “aliens” are arrested in Thailand for doing work which would not be considered illegal for foreigners without work permits in other countries.