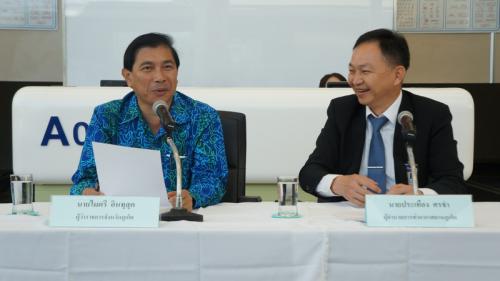 “The first two weeks are trial weeks for the terminal. We will start with six charter flights per day: three to Russia and three to China,” said Director of Phuket International Airport Pratuang Sornkham.

“During this period, we will make sure that the check-in system works correctly. By the end of the month, all departing international charter flights must check in at the X-Terminal.”

Phuket International Airport is the only airport in Thailand that has a terminal dedicated to serving charter flight passengers, Phuket Governor Maitri Inthusut said at the opening.

“It will help decrease the crowds in the main terminal,” he added.

According to Airports of Thailand (AoT) statistics, nearly one-third of all international passengers arrive and depart on international charter flights.

Charter passengers will have to check in at X-Terminal, and then take a free shuttle to the existing terminal to clear Immigration and Customs before departure, explained Mr Pratuang.

The X-Terminal is part of a 5.8-billion-baht airport expansion project (story here).