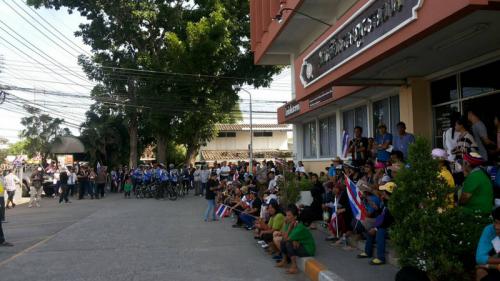 PHUKET: Phuket anti-government protesters are blockading the Thalang Police Station in an effort to prevent the transfer of ballots to voting stations for the national election tomorrow.

A large crowd of protesters gathered outside of the police station, where the ballots are being held, at about 9pm yesterday.

“I can confirm that the ballots are still in the station, as I requested to see them at about 10:30am,” said protest co-ordinator Suratin Lian-udom.

The protesters, who effectively blocked any candidates from registering for voting District 1, remain steadfast in their determination to prevent police from distributing District 2 ballots that list only a single candidate, Pheu Thai party member Jirayus Songyos.

“We disagree with the elections being held tomorrow, and will continue to show our support for the protesters in Bangkok,” Mr Suratin said. “We will stay here until officials announce that all of the election poll booths in Phuket have closed.”

Unlike the local MP ballots, the party list ballots have yet to arrive in Phuket, Mr Suratin told the Phuket Gazette.

“However, we are monitoring the delivery status,” Mr Suratin said.

“If the party list ballots arrive, we will block whichever building officers decide to keep them in.”

Lt Col Pisit made it clear that police will avoid any confrontation with the protesters when officers attempt to move the ballots from the station.

“If they are able to block us, we will not transport the ballots. We do not want any violence,” said Col Pisit.

“Despite the protesters, we will remain open to serve the public.”

Phuket’s X-Terminal to be tested by Russians, Chinese