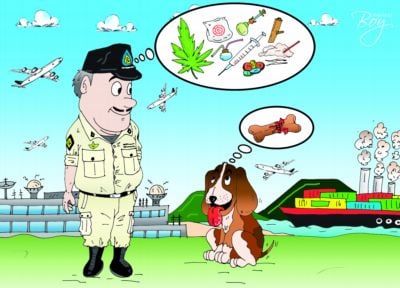 PHUKET: It is sad that Phuket’s two specially-trained drug dogs have been suspended from “active duty” for lack of dedicated handlers, especially given the time invested in their training and the phenomenal results displayed by the beagle Bebe during her first day on the job last July.

Despite a steady stream of highly-publicized drug arrests and seizures over the past year, there can be little doubt that our island is still awash in illegal narcotics, especially ya bah (methamphetamine) and its crystallized version ya ice (crystal methamphetamine).

Statistics released by Phuket Provincial Police show that drug-related arrests accounted for 3,385 crime cases recorded in Phuket in fiscal 2011, more than half (54.1%) of all crime cases in the province during that period. This was a 6.2% increase year-on-year in the number of drug cases, which was almost five times the number of cases in the second most popular crime category: gambling.

With figures like these, it comes as little surprise that drug convicts make up about 75% of the inmates at Phuket Prison.

The ease with which these drugs are obtained was highlighted yet again recently when six young teenage students were found to have skipped school and broken into a derelict disco, where they smoked meth for two consecutive days. How 13-year-olds can come up with the money to pay for these expensive drugs is anyone’s guess, but the fact that it happened puts the role – or lack thereof – of parents at the forefront.

Despite such worrying trends, suppression efforts by both police and provincial drug units have largely remained static in terms of approach. Where “innovation” has been called into play in terms of improving detection capability, the results have bordered on the comical. As anyone who follows the local news is aware, mountains of ya bah pills have been smuggled onto the island over the years aboard tour buses running the Bangkok-Phuket route.

Yet, rather than training dogs to check the baggage holds of buses and suspicious vehicles crossing onto the island at Tah Chat Chai, the authorities a few years back opted to invest millions of baht to buy Alpha 6 “molecular resonance” detectors, even after the “technology” they were based upon had already been completely discredited abroad.

Thus it was an exciting breakthrough when Muang District Chief Supachai Pochanakul’s beagle Bebe sniffed out stashes of both yah ba and yah ice just five minutes into her first assignment last July. Unfortunately, she and her handler have now parted ways and what looked to be a very promising career is now on hold – indefinitely.

It is time for the police themselves get into the drug-dog training business, rather than leaving it as the ‘pet project’ of one well-intended civil servant. Meanwhile, it is to be hoped most fervently that Bebe is not gone because she proved too effective on the job.