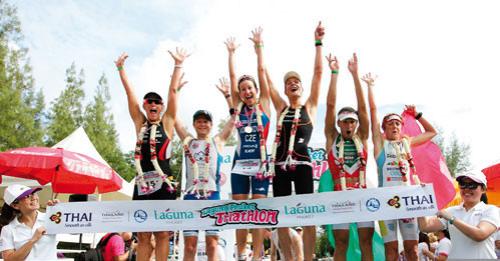 During the proceeding seven days, Laguna Phuket will be a hive of activity, with athletes and guests taking part in social activities, training sessions and competitions at the destination resort.

The atmosphere will be electric and guests and visitors will enjoy what Laguna, and indeed Phuket, has to offer. On Sunday, December 1, athletes will race in the CLP – a longer, more challenging triathlon, comprising a 1.9km swim, 90.1km bike ride and a 21.1km run.

The Race of Legends

The days between the two spectacular events in Phuket will be filled with a Tri-Fest of training and social events held in and around the luxurious Laguna Phuket destination resort.

This triathlon carnival has proved a popular attraction for international athletes eager to sample the delights of Thailand while rubbing shoulders with the likes of Ruedi Wild and Radka Vodickova, last year’s LPT champions.

Reigning champion of the Ironman 70.3, 2012 (last year’s version of the newly branded CLP), Melissa Hauschildt of Australia, has also registered to return to defend her title.

She’s set to face strong challenges from a field that will include Vodickova and Granger, who finished second and third respectively last year.

LPT and CLP are once again set to see high-caliber fields of elite men’s pros taking on their tropical challenges.

Reigning World Champion Pete “PJ” Jacobs has confirmed he will race the inaugural CLP half distance triathlon on December 1 – setting up an intriguing contest with fellow Australian Chris “Macca” McCormack, the defending title-holder, two-time world champion and Challenge Ambassador, for a slice of the race’s 25,000 Euro prize purse.

Italians Massimo Cigana and Alberto Cassadei will try to make an impression on the two Australian champions in a field that also features LPT 2012 champion Ruedi Wild from Switzerland.

The enduring appeal of Laguna Phuket Triathlon and the unique challenges of Challenge Laguna Phuket are attracting entries from leading international pro athlete personalities, as well as age groupers worldwide.

To date, a combined 1,500 athletes have signed up for the two main races. Registration for the 2013 half distance Challenge Laguna Phuket is open until November 20 and a total of approximately 1,800 athletes are expected to sign up this year.

The LPT and CLP are proudly sponsored by the Phuket Gazette and PGTV. For more information click here.