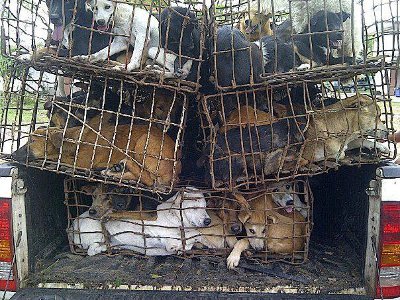 PHUKET: The Phuket-based Soi Dog Foundation has launched a “Trade of Shame” campaign to raise awareness of the illicit dog meat trade in Asia.

The Thai Veterinary Medical Association estimates that as many as 500,000 Thai dogs per year are transported to Vietnam and Southern China, where they are butchered for dog meat, the Soi Dog Foundation says.

“The conditions under which the dogs are transported and slaughtered are horrific and many die from suffocation long before they reach their final destination. In reality these are the lucky ones.

“Those that have survived the unbearable journey are then brutally killed due to people believing that the more pain inflicted before death the more tender the meat will be. The dogs are tortured for hours and then often skinned alive,” said foundation says.

In almost all cases, the dogs are stuffed into rusty cages that are piled onto trucks. The cages are then put onto boats for the short river crossing to Laos, where they are then loaded onto more trucks for the journey to Hanoi.

The Soi Dog Foundation and Thai government officials are working together to end the practice.

“Since the first raid last August, when nearly 2,000 dogs were intercepted near Nakhon Phanom – though many had died already from suffocation, en route to Laos – there have been several other successful interceptions by the Thai police and Thai navy.

“Most recently, several successful interceptions have been made in Ubon Ratchathani as smugglers try to outfox the authorities by changing routes… Some arrests have been made, but penalties imposed have been light when prosecutions have occurred,” said the release.

The current law for the illegal export of live animals and carcasses allows for a jail sentence of up to two-years and a fine of up to 40,000 baht.

The Soi Dog Foundation is calling for people to join its Trade of Shame campaign to raise awareness and stop the trade.