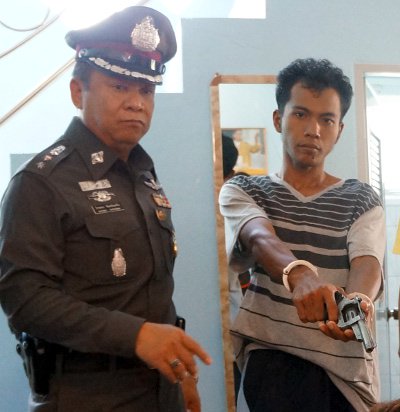 PHUKET: Two of the three men arrested for the shooting execution of Sumittra Namfak in Phuket on Saturday have confessed to taking part in the murder.

The third suspect continues to proclaim his innocence.

Police today had the suspects stage a re-enactment of the crime at the victim’s house in Thung Thong.

The house was empty during the re-enactment as family members were attending Ms Sumittra’s funeral.

Thung Thong Police Deputy Superintendent Borriboon Yusuksomboon told the Phuket Gazette that the gunman, Savit Jongruk, 28, from Loei province, and the driver, Aroon Patan, 27, from Krabi, had both confessed to their involvement in the fatal shooting.

“Sanguan Phu-ngern, a 26-year-old from Krabi, claims he was not involved [in the murder] and that he was only travelling with the other two,” said Col Borriboon.

During the re-enactment, Mr Savit explained that he entered the house via the front door, which was open, and saw Ms Sumittra lying on the couch watching TV.

“I shot her in the head and ran back to the truck where my friends were waiting for me,” said Mr Savit.

A second person was sitting on the floor next to Ms Sumittra when she was shot, he said, but he gave no description of who that person was.

“The suspects claim that they were hired but at this stage of the investigation we can’t divulge the identity of that person,” Col Borriboon said.

“We have yet to transfer the case to the provincial prosecutor as we need more time to conclude our investigation,” he added.