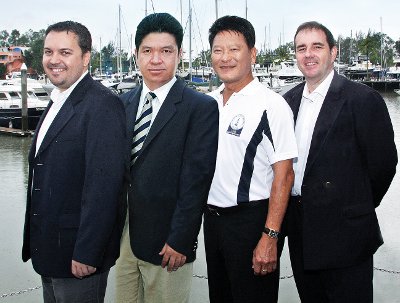 PHUKET: As with our Person of the Year Award in 2009, we have opted for the plural again this year and are delighted to announce that the honor goes to four of the driving forces behind the annual Phuket King’s Cup Regatta.

Many forces are required to stage an event of this magnitude, but because of the length of their service and the true “driving” nature of it, we salute Regatta stalwarts Duncan Worthington, Santi Kanchanabandhu, Pamuke Achariyachai and Simon James.

That the King’s Cup is a tradition gone global for Phuket, there can be no doubt, and Khun Santi, having first sailed in the event in 1991, is the most ‘traditional’ of our winning quartet.

He joined the organizing committee in 1997 while serving as Commodore of the Royal Varuna Yacht Club, an institution under royal patronage bestowed by His Majesty the King, himself a frequent participant in the Club’s many sailing events.

Duncan, who has now been on the committee for more than a decade, and who is accustomed to working 15-18 hour days for the event, is primarily responsible for relationships with the media, 133 of which covered the Cup this year. But Duncan is in fact a committee generalist for whom Regatta success is the sole goal, year after year.

Thirteen years ago, when he was president of the Phuket Tourist Association, Khun Pamuke was approached by the committee for help with hosting events. He immediately offered his Kata Beach Resort and continues to sponsor parties and many other services during the week-long event every year.

Simon James joined the committee in 1997 and began setting the courses for the event in 2000. He continues as Race Director, setting two courses every race day. He also defines the classes, sets the handicaps, trains volunteers and produces the race results – all critical and at the heart of the Regatta.

What drives these drivers? Duncan sums it up: “Sure, it’s a lot of work, but the event is such a great showcase for Phuket, for Thailand and for sailing. We are lucky to be able to support all three,” he says.

Boy, 7, on life support after rescue at Phuket beach

A New Year’s message from the Phuket Governor