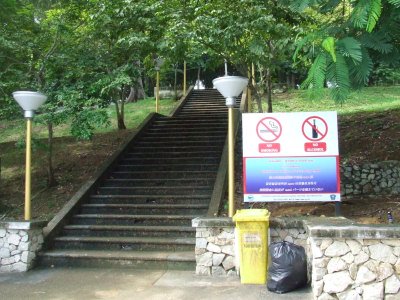 PHUKET: Laem Phromthep is now a no-smoking peninsular. “The prohibition zone starts at the bottom of the stairs and extends along the hill,” Rawai Municipality officer Sanya Kontien told the Gazette.

The ban, which includes the drinking of alcohol, began at the end of last month and signs have been posted to inform visitors at Phuket’s iconic tourist attraction.

The signs feature the internationally understood symbols for no smoking and no alcohol, as well as written warnings in Chinese, Korean, English and Thai.

“First, we warn people we find smoking or drinking, but if they ignore our warnings then they may be fined up to 2,000 baht,” Mr Sanya explained.

“But we haven’t fined any one yet,” he added, smiling.

So far municipal officers have warned about 10 people, most of them Chinese and western tourists. “All of them were quite understanding and stopped smoking.” said Mr Sanya.

If people ignore repeated warnings from municipal officers, they will call the police, he added.

Eight officers are rostered to enforce the ban at the site, with three on duty at any one time, Mr Sanya said.

“Smoking areas have been established near the car park,” he added.

The ban comes as Phuket is about to enter its dry season, during which Laem Phromthep often suffers from small wildfires.