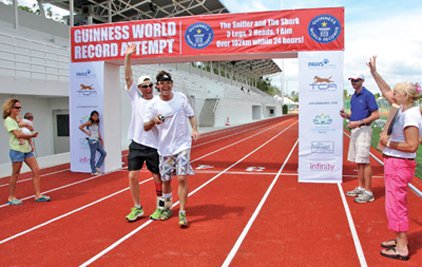 PHUKET: They may not have made their way into the Guinness Book of World Records, but Jay Walker and Russell Distance Russell made their way into local folklore on December 11 after walking three-legged for over 16 hours and 40 minutes and covering over 70km.

The two men, also known on the island by their DJ monikers “Shark” and “Sniffer” were trying to break the current 3 legged world record of 100.13km which was set back in 2008 and were doing it to raise money and awareness for The Phuket Animal Welfare Society (PAWS).

Despite a valiant attempt they were forced to retire after 70km with severe blisters making it impossible to walk.

“Half of my foot had just peeled off and I walked the last few kilometers on raw skin – which I can tell you, is mighty painful,” said Jay.

Speaking to the Phuket Gazette after the attempt a bedraggled Russell described the ordeal.

“It was an immense experience and incredibly painful. We were on the brink of doing some serious injury. 70km is almost two back-to-back marathons which we did three-legged – a totally different gait,” he said.

Despite not reaching their goal, they did achieve their target of raising funds and awareness for PAWS with over 100,000 baht raised in sponsorship.

“We had a few people sponsor us just for doing it and others per kilometer. The interesting thing is if we had attempted this a couple of years ago, when the record stood at 38 km, it would have been easy. I now have a lot of respect for the Australian record-holders and would love to meet them to find out if they hit the wall as we did and to see what training they did.”

When asked if he would ever attempt this record again Russell was unequivocal, “I don’t think so. Watch this space, but I’m pretty sure I won’t be attempting this particular record again. The biggest thing for me in this attempt has been the support that we’ve had from people all over the world who sponsored us, gave us messages of support and particularly those who came to the Thanyapura Sports and Leisure Club to walk with us throughout the night.”

Despite not having broken the Guinness World Record they both set a personal record of being strapped together for 16 hours and 40 minutes while walking 70km and it is unlikely that anyone will break that particular record again.

“It’s a kind of bittersweet feeling. We’re devastated that we missed the mark, but hugely proud of what we actually accomplished” said Russell.

If you’d like to help PAWS then go to W: pawsphuket.com for more information.

Phuket Gardening – put a cork in your garden