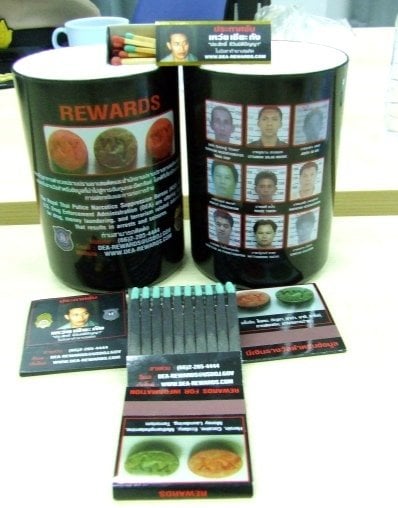 PHUKET: The US Drug Enforcement Administration (DEA) office in Bangkok has confirmed that its “spot a drug lord” souvenirs will not be available in Phuket until the new year.

The souvenir items, a collection of coffee mugs, pens and T-shirts bearing images of some of the DEA’s “most wanted” drug traffickers, were initially intended to be distributed this week

to coincide with the Patong Carnival on Wednesday, marking the arrival of the annual tourism high season.

David McConell, DEA Group supervisor at the Bangkok Country Office, told the Gazette today, “There were some issues on organizing a bunch of different things, so it will be postponed until the new year.

“My guess is that it will not be until the first week in February, but we’re not 100% sure yet. We’re trying to coordinate with the Thai authorities right now,” he added.