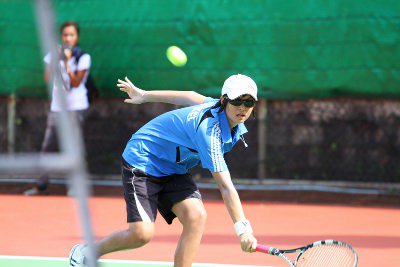 PHUKET: Phuket’s Bussarin Raktaengam won the final of the girls’ singles tennis event of the Phuket Games 2012 this morning with a 6-4, 6-3 straight-sets victory over Rongrong Linbanjong of Bangkok.

The win made Bussarin the third Phuket athlete to snatch two golds in the games, which comes to their conclusion with a big celebration tomorrow evening at Surakul Stadium, starting at 5pm.

Phuket won another gold today through Somphan Thongseedum, who took top honors in the boys’ Penjak Silat under 42kg competition.

After securing three more silver medals in soft tennis today, Phuket is now in seventh place in the overall standings, which are based on gold medals only. The island now holds 17 golds, along with 15 silver and 21 bronze medals.

Today will be the biggest medal day in the Phuket Games 2012.

Medals will be awarded in 87 events, including 16 in boxing and 21 in muay thai.

In volleyball, Nakhon Ratchasima will take on Nonthaburi in the boys’ final at Saphan Hin that started at 1pm. The girls’ final (2:30pm) will pit Nonthaburi against Khon Kaen.

Fans of beach volleyball can watch the exciting finals at the Beach Volleyball center, near the Chinese Shrine at Saphan Hin, starting at 4pm. In the boys’ competition, Si Sa Ket will take on Nonthaburi. The girls’ event will be an all-Isarn affair, with two sides from Kalasin province facing off on the sand.

Weather conditions could be blustery for the many outdoor events taking place today. The latest forecast from the Thai Meteorological Department calls for cloudy conditions with scattered thundershowers over 60 per cent of the island, with southwesterly winds at speeds of 20 to 40 kilometers an hour.

An advisory against swimming remains in effect, with waves of up to three meters or higher in storm areas, and dangerous riptides in many areas.

Phuket Live Wire: Is the iPad rotting your child’s brain?