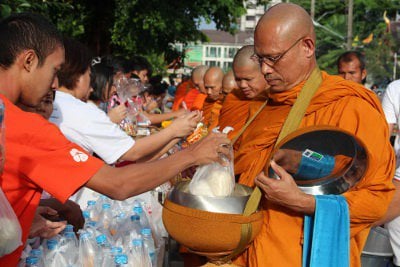 Visakha Bucha Day is observed on the day of the full moon during the 6th lunar month, which usually falls in either May or early June.

It is a day to commemorate three important events in the life of the Buddha: his birth, enlightenment and passing away. These events fell in the same lunar month and on the same day of the year in the Buddhist era.

Following the alms offering and a special sermon and blessing ceremony to honor the occasion, the leading officials led a mass prayers and candlelight procession circling the temple’s ordination hall.

To further mark Visakha Bucha Day there will be a “run and walk meditation” activity at King Rama 9 Park (Suan Luang) in Phuket Town this afternoon, followed by prayers and another special service at Wichit Sangkaram Temple in Phuket Town this evening.

Also at the temple, starting at 7pm, will be the traditional circular candlelight procession together with the offering of robes and other necessities to monks in order to celebrate 2,600 years of Buddha’s enlightenment.

All of the money and items donated will be given to the Buddhism Promotion Center of Thailand.

The activity is part of the “Sambuddhatva Jayanthi” (Lord Buddha’s Birthday) celebrations in Phuket that began on Saturday and will conclude tomorrow.

Visakha Bucha Day festivities will also be held tonight at the Big Buddha image in Kata, where the circular candlelight procession will begin at 7 pm. All are welcome to join.

Police nationwide will strictly enforce the measures of the Alcohol Control Act of 2008 and are asking pubs and retail outlets nationwide to cooperate in not selling alcohol products.

Violators are subject to six months in prison, a 10,000 baht fine, or both.