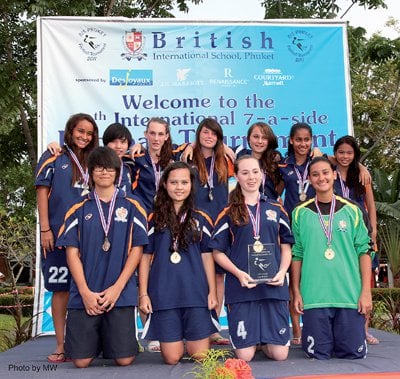 Over 700 players from 25 schools participated in the competition with all teams exhibiting good footballing skills and excellent sportsmanship.

Schools, clubs and projects from all over East and South East Asia traveled from as close as Pa Khlok and as far as Seoul, Taipei and Jakarta to give the tournament a truly international atmosphere.

Most of the pool games concluded on the Friday while all the playoffs and finals took place on Saturday.

BIS Phuket’s ‘under13’ girls endured extra time and then a nerve-racking penalty shoot-out before claiming their age-group trophy .

In the ‘over 15’ boys final, Youth Football Home secured the title after another penalty shoot-out against Regents from Pattaya.

BIS Phuket had a great tournament with the ‘under 9s’, ‘under 11’ girls, ‘under 13’ girls, and ‘over 15’ girls all victorious in their respective age groups. BIS Phuket’s ‘under 15’ girls and ‘under 13’ boys both finished in bronze medal positions.

A full breakdown of results from the tournament is available on the school website at bisphuket.ac.th.