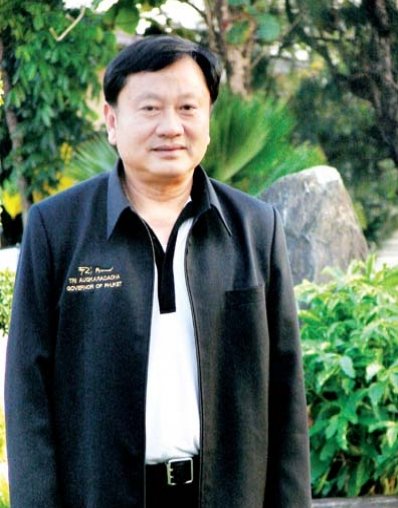 PHUKET: Tri Augkaradacha, Phuket’s 43rd governor, was promoted to the top job on October 1, 2010, when he set tourism promotion as his prime policy objective. Here, in his regular monthly “Governor’s Letter” in the Phuket Gazette, he talks about the problem of unregistered hotels, a stalled road project, and the coincidence that he and PM Yingluck Shinawatra are both alumni of the same university in the USA.

“Statistics as of September 12 show that there are 279 hotels with a total of 31,014 rooms legally registered with the province.

“As for hotels operating without permission, there are 117 that we are aware of.

“The owners of these hotels are running businesses without initial environmental evaluations (IEEs) or environmental impact assessments (EIAs), or [their hotels] were built without the necessary construction permits from local authorities.

“There are also apartments, guesthouses and condominiums that offer daily accommodations and other services that fall under the Hotel Act, so they should be registered as such.

“I would like to bring both of these groups into the system and have them legally registered. I have been working on a policy to help achieve this and I held a meeting with the [illegal] operators to inform them of my efforts – I will help them make it right.

“I admit that in the past, the government sector was lax in terms of enforcement, so now I need to compromise with them – both for their benefit and ours.

“For a start, the government would benefit from increased tax revenue from these businesses. Second, it would be good for them in terms of marketing and in obtaining investment funding. Currently, hotel operators go abroad on [promotional] road shows many times a year. Customers and travel agencies always make deals [mainly] with legally-registered hotels.

“Also, hotels that don’t have legal registration documents are ineligible to apply for investment through proper channels. Some must seek loans from informal funds [sources] that charge high interest rates.

“For the proposed road project under the high-voltage power pylons from Phuket International Airport to the bypass road, this project was initiated by former governor Wichai Phraisa-ngop as an alternative to Thepkrasattri Road.

“Though there has not been much progress on this project, we still maintain it as part of our yearly development plan. We are now in the process of [trying to] expropriate 207 plots of land from 175 different owners. Some have agreed to provide the required land, but some have not. Once we acquire all the necessary plots we will continue by doing the EIA and seeking a 450-million-baht budget.

“There are concerns that it will not be safe to have a road under high-voltage power lines. People ask what will happen if a car crashes into one of the pylons – will the whole island be blacked out? Or would exposure to electromagnetic radiation from high-voltage lines be dangerous to drivers?

“The Phuket Highways Office and Phuket Provincial Office are responsible for this project, so it will fall to them to study these issues and find the best solutions.

“You [Phuket Gazette] asked about the fact that I earned my master’s degree from Kentucky State in Frankfort, Kentucky, also the alma mater of current prime minister Yingluck Shinawatra. I did [also] study in the same field [public administration] and university as PM Yingluck, who also got her bachelor’s degree at Chiang Mai University.

“However, I studied at these schools about 15 years before her and we don’t know each other personally.

“At any rate, she is my boss now and I see she is performing well [and] to the best of her abilities. I will take action to put her policies into practice in Phuket.”

Phuket Island View – Soi Dog in it for the long haul