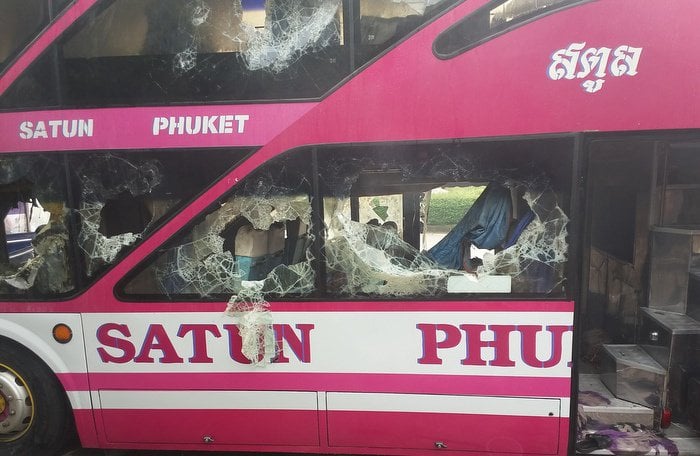 PHUKET: A fire that broke out on a Phuket-Satun bus on Wednesday claimed the life of a 12-year-old girl on Saturday, confirmed Lt Sorasak Jandee of the Takua Thung Police.

The girl, named by police only as Panida, is the second of four victims admitted to the Phang Nga Hospital ICU to die from smoke inhalation. The other two victims remain in comas in the ICU, while Daeng Thaharat, 76, was pronounced dead at the scene (story here). The day after the accident, 25-year-old Sunisa Chookaew died from her injuries (story here).

A total of 21 passengers were on the bus, which was parked on the hard-shoulder of Petchkasem Road in Phang Nga province last Wednesday while the 54-year-old driver, Prathueng Sakkaew, used a borrowed welding torch to fix his seat.

“While he was welding, a spark set his seat on fire and flames quickly spread to the rear of the bus,” said Lt Sorasak. “Mr Prathueng panicked and fled through the driver’s door, leaving his passengers trapped.”

Nearby locals responded to Mr Prathueng’s calls for help and broke the windows of the bus, allowing the passengers to escape the smoke filled vehicle.

“We are now in the process of questioning passengers who were on the bus. However, it is quite difficult, as they are not all in Phang Nga,” said Lt Sorasak.

“We will call in the families of the deceased victims, the bus driver and the bus company together so that they can start negotiations [with regard to compensation].”