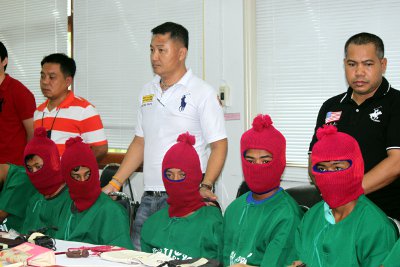 PHUKET: Police have arrested a juvenile gang of bag-snatchers responsible for at least 17 thefts targeting tourists on holiday in Phuket.

Chaiprasit ‘Jew’ Boonyok, 20, was identified as the leader of the seven-strong gang by Phuket Provincial Police Deputy Commander Pirayut Karajadi at a press conference held at Patong Police Station on Tuesday.

“We had been tracking the gang for two months,” said Maj Somsak Tongkliang of the Patong Police.

“According to our intelligence the gang members responsible for the string of recent tourist-targeted thefts around Patong, Kata and Karon Beach have tattoos of carp and devil faces,” he said.

The police got their break in the case when they received a report of a bag-snatch having taken place near Banzaan Market in Patong at 10pm on Monday.

A search of the area found Mr Chaiprasit acting suspiciously. He was interviewed by the police at the scene.

The police noticed a tattoo of a carp on his back, and deemed him worthy of further questioning back at the station.

During the interview at Patong Police Station, Mr Chaiprasit confessed that he and the rest of the gang had committed 17 similar robberies in Patong.

He told the police that following a successful crime they would sell the loot to the Delta shop at the Big C supercenter near Phuket Town.

Acting on that information, police then arrested Kitti Kasirak, 28, a Delta employee working at the shop’s mobile phone counter.

Police are to question the owner of the shop to ascertain if he were aware of Mr Kitti’s actions, or indeed, actively a part of them.

Mr Chaiprasit told the Gazette that he had been committing robberies for more than two years and had been caught three times.

He said that he spent the money on “loafing around” and buying such things as mobile phones and clothes, whereas the others used the proceeds to buy drugs.

As a result of the police operation, police seized two cameras, 10 mobile phones, two motorbikes and two gold rings from the boys’ houses in Kathu and Phuket City, as well as from the Delta shop.

“They used motorbikes to snatch bags from unwary tourists who were either walking along the street or driving motorbikes,” said Col Pirayut.

“We believe there are about 40 other suspects currently involved in similar criminal activity. We are collecting evidence to effect their arrests,” he added.

“These events are ruining Phuket’s tourism image,” he added.