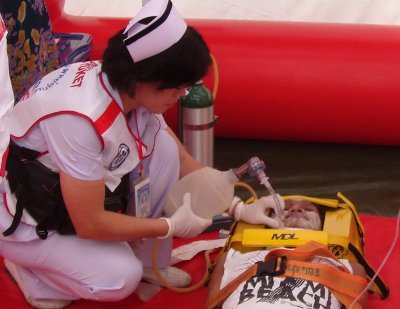 The drill was based on possible damages from a hypothetical 5.0 magnitude earthquake centered in the area of Srisoonthorn subdistrict, which sustained the greatest damage on April 16, when a 4.3 Richter quake shook Phuket.

“Thalang is in an earthquake-risk zone, so there is a possibility that an earthquake could happen there again in the [near] future,” explained Dr Sak Tanchaikul, chief of the Phuket Provincial Public Health Office (PPHO).

The drill was aimed at reassuring Srisoonthorn villagers of local rescue services’ capabilities and to train workers in what actions to take, should another earthquake strike, Dr Sak said.

“We want to train health officials and officers from other related organizations in providing medical assistance to injured people, including the handicapped, children and the elderly,” he added.

During the exercise, residents were evacuated from the area, a triage center was set up and ambulances rushed people with simulated injuries to various medical facilities on the island.

Those marked with “small” or “middle” injuries received first aid on site and were taken to Tambon Srisoonthorn Promoting Hospital nearby.

Those marked as having “severe” injuries were sent to Vachira Phuket Hospital in Phuket Town.

The event also included a seminar and an exhibition to educate local public health volunteers and residents so that they will be able to take the initial steps to deal with the situation on their own, Dr Sak explained.

The drill on Wednesday followed Central Festival Phuket staging an evacuation drill on May 17.

That exercise was carried out with assistance from the Phuket office of the Department of Disaster Prevention and Mitigation.

Phuket gets a new “Yellow Bus’