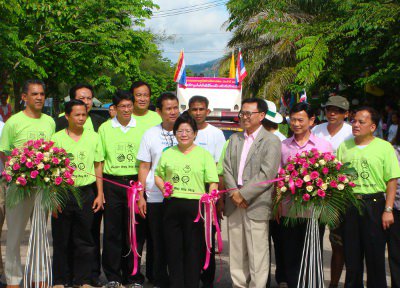 PHUKET: Union leaders in Phuket yesterday demanded that the government initiate measures to reduce and control the soaring cost of living, which they insist has long outstripped minimum wages.

The formal demands for pricing controls headlined a list of six demands presented to Phuket Vice Governor Sommai Prijasilpa at the island’s annual Labor Day Fair held at the Phuket Provincial Office of Labor Protection and Welfare in Phuket Town.

Although the official slogan and agenda of the event was “A clean labor force united to save the environment and fight drugs”, employers and employees in attendance clearly had their own more pressing agenda.

Presenting the demands on behalf of the Phuket workforce was Wichit Dasantad, president of the Federation of Hotel and Services Business Labor.

In addition to controlling and capping prices for consumer goods and daily necessities “not to be risen beyond actual production costs”, other demands for the government on the list were as follows:

• To strictly enforce the new minimum daily wage across all sectors

• To provide workers and the public with essential foreign-language learning opportunities ahead of the ASEAN Economic Community (AEC), w coming into full effect in 2015, through government-sponsored language courses in English, Chinese, Japanese, Russian and Burmese.

• To establish order for transnational labor affairs by strictly enforcing labor laws and ensuring due worker benefits, including medical care, are honored, in addition to strictly enforcing that laborers are performing duties consistent with those identified in their work permit; and applying pressure for illegal aliens to be either deported or registered as legal alien workers

• To ratify the ILO (International Labor Organization) Convention number 87, the Freedom of Association and Protection of the Right to Organize, and number 98, the right to organize and collective bargaining.