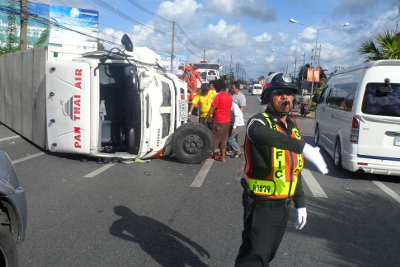 PHUKET: The driver of an express mail service truck will be charged with negligent driving and property damage after his delivery truck crossed over a median strip and overturned on Phuket’s main road from Phuket Town to the airport on Tuesday afternoon.

Thalang Police were notified of the accident, at the u-turn on Thepkrasattri Road near the Kan Keha public housing estate, about three kilometers north of Phuket’s famed Heroines Monument, at 3:30pm.

Arriving at the scene with Phuket Kusoldharm Foundation workers they found a six-wheeled Hino truck overturned in the middle of the road, its front wheels partially ripped from the chassis.

Southbound traffic was backed up over two kilometers by the resulting impasse.

Satitpong Phanthu, the 39-year-old driver, was standing uninjured by the truck, which is owned by the Pan Thai Air company.

“We had just picked up mail and parcels from the post offices in Phuket Town and Koh Kaew and were on our way to Thalang Hospital. I was moving at high speed when I had to swerve to avoid a motorbike that cut me off,” said Mr Satitpong, adding that he did not remember the license plate number of the motorbike.

The truck ran up onto the median strip and hit a palm tree then flipped over onto its side before coming to rest in the southbound lane.

The dynamics were reminiscent of the horror smash in Phang Nga in February that left four Swedish youths and their Thai driver dead.

In this case, however, the vehicle did not hit any oncoming vehicles and no injuries were reported.

A tow truck was called to the scene to remove the wreckage, Lt Col Pisit said.