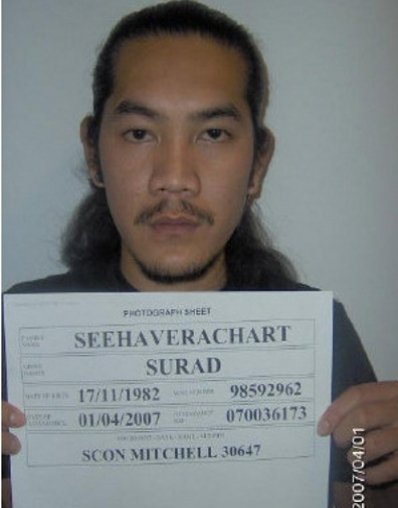 PHUKET: Two former employees of a Phuket Town restaurant are fighting extradition to Australia, where they are wanted for the 2009 stabbing murder of an Australian man in Melbourne.

The pair, 28-year-old Surad Seehaverachart and Thatiya Cherdphutham, 25, are wanted for the May 2009 stabbing murder of 29-year-old Luke Mitchell outside a nightclub.

Surad was arrested by three officers stationed at the Tourist Police Region 5 office in Phuket Town on September 18 last year.

One of the three officers, Sgt Maj Meesak Mankhong, told the Rachada District Court in Bangkok yesterday he and fellow officers were working under orders from the Tourist Police Region 5 commander when they served a warrant issued by the Criminal Court and arrested Surad at an Isarn restaurant in Phun Pol Plaza in Phuket Town.

Surad was handed over to Phaholyothin District Police in Bangkok.

Thatiya, who was employed by the same restaurant, was arrested at Suvarnabhumi Airport in Greater Bangkok on October 30, 2010.

A third Thai man allegedly involved in the slaying remains at large in Thailand.

Both Surad and Thatiya, who were working and studying in Melbourne at the time, admitted to killing the Australian and then fleeing the country.

However they said they were acting in self-defense against the much larger Australian, who they described as “almost two meters tall”.

They said Mr Mitchell was drunk and began bullying them during a crowded outdoor festival.

However, Australian newspapers quoted witnesses as saying Mr Mitchell was a Good Samaritan who stepped in to try and break up a fight during which a man was being badly beaten.

He suffered five stab wounds and later died in hospital, according to press reports at the time.

The next extradition hearing is scheduled for May 23.