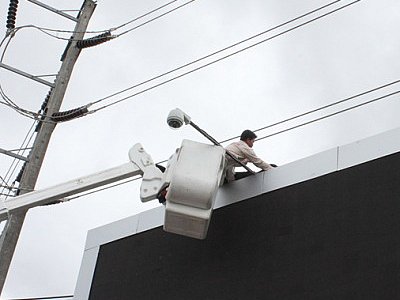 PHUKET: The Arrow Media advertising company has agreed to pay 100,000 baht compensation to the family of one of its workers who was electrocuted by a bare high-voltage power line at the Darasamuth Intersection on September 28.

Wai Hayoung, 32, was killed instantly after being electrocuted by a 115,000 volt (115kv) power line while climbing an advertising board to make repairs.

An Arrow Media spokesperson expressed the company’s regret over the tragic death of Mr Wai, saying that he had been a skillful worker and a good team member.

“Nobody expected this to happen,” the spokesperson said.

According to the spokesperson, the electric billboard that Mr Wai was sent to repair when he was electrocuted does not belong to their company.

Having noticed some parts were broken they sent workers to fix a competitor’s billboard, she said.

“We are well aware of the dangers of high-voltage cables and our company tries to avoid placing signs around high-voltage equipment and cables. However, it’s difficult to avoid as the power cables in Phuket are messy and unorganized. You try to avoid one, but run straight into another,” she said.

“I have reiterated to our workers to be extremely careful when working [close to electrical infrastructure],” the spokesperson added.

The Gazette contacted the Phuket Provincial Electricity Authority (PPEA) to find out how Mr Wai had come into contact with a high-voltage power cable so close to the advertising sign he was repairing.

“I arrived at the scene about an hour after he was electrocuted,” said Permpol Tunsakul, an electrical engineer at the Operations & Maintenance Department.

“The billboard is in a high voltage danger zone. The PPEA has several times issued written warnings to advertising and construction companies not to erect structures around that area, but some have not heeded our warnings,” he said.

“According to the news media, Mr Wai died after coming into contact with the 33kV cable, however our investigation places him much closer to the 115kV cable. It wasn’t the 33kV which was far below where he stood. I understand that he was standing on top of the billboard close to the 115kV cable, holding a galvanized panel,” he said.

Mr Permpol explained that electricity supplied by the Thalang power substation was carried along 115kV lines before being converted to 220v and distributed to users in Chalong, Patong and Phuket City.

“The 115kV cable is bare because we would have to spend a lot of money if we were to encase those cables in plastic jackets,” he said.

“We have sent this information to all concerned, including advertising companies, not to place structures near high voltage lines. With buildings, usually there isn’t a problem as before construction begins they talk to the PPEA to ask about electricity distribution. We can then check to see if they are building in a high-voltage danger zone.

“However, advertising companies don’t have to inform us before they erect a billboard,” he added.

“When we notice billboards in high-voltage danger zones, we send the advertising company a warning letter, requesting that they remove the sign as we will not be held responsible for accidents. Many comply, but some take no action. We can sometimes file a complaint with the police, but can’t do anything ourselves as we don’t own the land,” Mr Permpol said.

Contacted to find out if an investigation of Mr Wai’s death would lead to those responsible being prosecuted, investigating officer Lt Col Nanon Pitakkultorn of the Phuket City Police declined to provide any information.

Mr Wai’s body was released from Vachira Phuket Hospital so that his wife, who is also employed by Arrow Media, could return to Nakhon Sri Thammarat to hold the funeral ceremony.