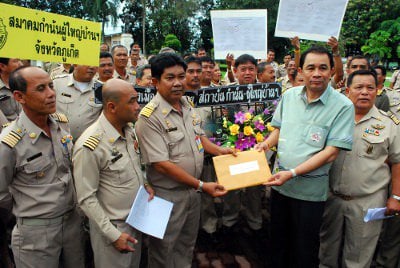 PHUKET: More than 200 subdistrict chiefs and village headmen gathered at Phuket Provincial Hall yesterday morning to protest the amendment of a law dictating the amount of time between their elections.

Previously, the law allowed subdistrict chiefs and village headmen to maintain their position until they reached the age of 60. The new amendment changes the length of the “elected term” to five years.

“Elections that occur too often can create many conflicts in the community,” explained Phuket Subdistrict Chief and Village Headman Club President Gomin Nopparat.

“A five-year term is too short for subdistrict chiefs and village headmen. It will create a discontinuity in projects and make it hard for leaders to gain the respect and trust of the community,” said Mr Gomin.

“We are administrators, not politicians. There is no need to hold elections so often,” he added.

The group handed a letter of protest to Deputy Governor Chaiwat Tepee, who promised to pass it on to Prime Minister Yingluck Shinawatra.

“We all signed in the letter explaining that we don’t want this law,” Mr Gomin added.