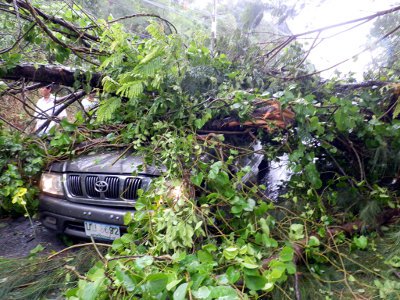 PHUKET: A Phuket construction worker was injured late yesterday morning when a tree crashed down onto the cab of the pickup truck he was riding in on the coastal road from Patong to Kamala.

Kamala Police were notified of the accident, near the access road to the Thavorn Beach Village Spa at 11:15am.

Arriving at the scene with Ruamjai Katanyu Foundation volunteer rescue workers, police found a large tree fallen across the road, crushing the cab of a Toyota pickup.

A witness rushed the victim to Bangkok Hospital Phuket for treatment of injuries to the neck and left leg.

Rescue workers and officers from the Kamala Tambon Administration Office, using a chainsaw, took about one hour to cut down the tree and re-open the coastal route to traffic. Long tailbacks in both directions resulted.

Supachai Suksawatdee, who was driving the Nakhon Sri Thammarat-registered vehicle, said he and Mr Supong were returning home in a torrential downpour from a construction site near Chalong Circle when the accident occurred.

“When I reached the site where the accident took place I heard what sounded like thunder and the tree suddenly crashed down on us, injuring my boss,” he said.

Fortunately the injuries suffered by Mr Supong were not life threatening.

He remained conscious throughout the incident and was able get out of the truck on his own, witnesses told the Phuket Gazette.