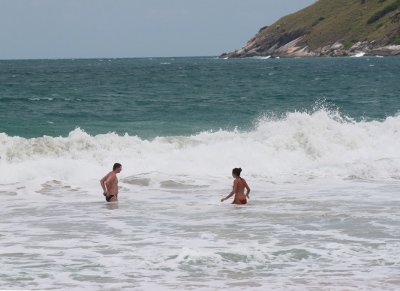 PHUKET: Officials are warning visiting athletes and others arriving for the Phuket Games 2012 to stay out of the water at island beaches, where dangerous riptides and heavy surf claim the lives of scores of overconfident swimmers each year.

The initial warning came on Friday morning during a meeting of Phuket Games 2012 management council at the Royal Phuket City Hotel in Phuket Town.

“At the moment it is monsoon season, so if tourists, athletes or staff want to visit the beach, please be careful and note the warning flags on the beaches before entering the surf. The red flags indicate danger, so please refrain from swimming in any areas where they are flying,” he said.

Anyone considering an ocean swim should do so in areas where the yellow “caution” flags are flying, as these indicate that the island’s lifeguards are on duty there, he said.

Lifeguards who are members of the Phuket Lifeguard Club returned to island beaches, on a volunteer basis, over the weekend. Their new contract with the OrBorJor, with life guards manning 33 stations at popular tourist beaches from 9am to 7pm annually, officially went into effect today.

Mr Paiboon told the meeting on Friday that the island was well-prepared for injuries or accidents that might arise during the games, which conclude on June 5.

“If anyone encounters or is involved in an accident during the games please contact our emergency services at the 1669 call center. We will dispatch an ambulance to get any injured people to hospital as soon as possible,” he said.

V/Gov Sommai added that visiting athletes, trainers, staff and members of the media were welcome to enjoy a free sightseeing trip around the island to visit popular tourist destinations including Phromthep Cape, Old Phuket Town and the Bang Rong traditional Muslim community in Pa Khlok.

The tours, limited to 40 people a day, depart from the Royal Phuket City Hotel, which is serving as the operations center for the Phuket Games 2012.

For more information about the Phuket Games, visit the press center on the second floor of the hotel or visit the Thai-language event website PhuketGames.com