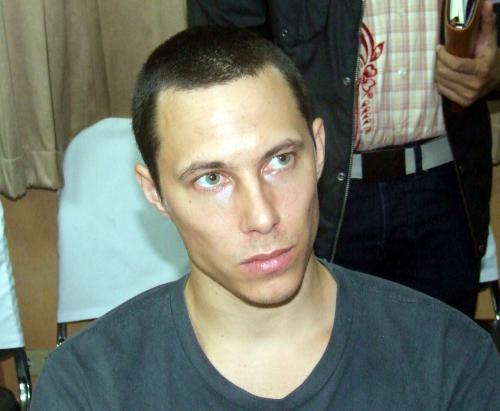 PHUKET: The trial of Swede Tommy Soderlund, charged along with fellow countryman Johan Ljung for a murder in Phuket in 2011, did not progress yesterday, as witnesses failed to appear in court.

Mr Soderlund and Mr Ljung are accused of stabbing to death Maksim Schantz and then stealing a motorbike in order to escape the scene. Mr Soderlund admits to stealing the motorbike, but denies the murder charge (story here).

Expected in court were the housekeeper of the building where the murder took place, the man whose motorbike was stolen and neighbors of the murder victim.

When witnesses did not appear, the judge gave a final date of August 9 for hearing their testimony and ended the session.

When arrested in 2011, the two men told police that they were angry with Mr Schantz for informing Tourist Police of a scam they were operating from an internet cafe in Pattaya. They tracked Mr Schantz to Phuket and though they were carrying a gun, knife and plastic band to tie him up, both suspects told police they did not intend to kill Mr Schantz (story here).

This is not the first trial delay Mr Soderlund has faced. The first court date in October 2011 was postponed to allow both Mr Soderlund and Mr Ljung to find their own legal representation. In April of 2012 it was postponed because no Swedish translator was available. In August that year, witnesses failed to appear to testify (story here).

In November 2012 the The Phuket Provincial Court ruled that it would hear the men’s cases separately.

Mr Ljung’s trial on June 27 of this year also hit a roadblock when the case investigator failed to appear (story here). His trial was deferred to September 9.