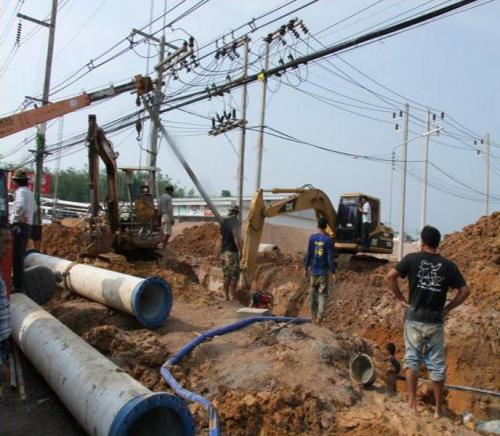 PHUKET: An argument broke out during the Phuket Governor’s monthly meeting with the media yesterday when journalist-residents of Wichit turned on the manager of Phuket Provincial Waterworks demanding to know why their water had been suddenly cut off for three days.

“Phuket Provincial Waterworks shut off the water supply water without notice,” said one media member who lives in Wichit.

“I didn’t have a chance to stock up on water,” he added.

Pisak Chonlayut, manager of the Phuket Provincial Waterworks Authority (PWA), did not apologize.

Instead, he argued that the PWA had given plenty of advance warning.

“I asked the PWA public relations division to announce the water shutoff on August 26 by driving around in a car with a loudspeaker, and we also contacted radio and newspapers to announce the news,” he said.

Journalists in attendance responded that they had heard no such reports.

Mains water supply was shut off from Thursday through Saturday last week, Mr Pisak explained, so that the PWA could replace existing water pipes with larger ones.

“Phuket needs to be able to supply more water to serve the increasing number of people here,” he said.

In another plan to meet Phuket’s growing water needs, the PWA is looking to increase the capacity of two water-treatment plants and build a new one, he said.

The new plant, to be located in Chalong, will be capable of providing 500 cubic meters per hour, and along with the other projects is expected to be finished by the end of 2013.

Although the PWA has a raft of new projects underway to increase water supply, Mr Pisak said he continues to search for water sources as insurance in case of a water shortage.

“We still need water to keep as back up. If anyone has empty land or a reservoir they want to sell us, please contact me directly at 081-6509346,” said Mr Pisak.

Mr Pisak promised the journalists that next time he needs to turn off the water, he will take additional steps to ensure every resident knows in advance.

“Next time I will order a car with loudspeaker to drive down every road in the area and I will contact the Public Relations Department at Phuket Provincial Hall to make sure that all media in Phuket know,” he added.

Phuket teaches Russian, Chinese and Korean tour operators how to be legal