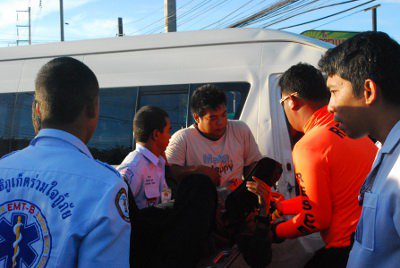 PHUKET: Police today confirmed they will charge the driver of the Phuket tour van involved in the accident yesterday morning that claimed the life of a 9-year-old schoolgirl with reckless driving causing death.

However, Lt Kraisorn added,”We have yet to press him with the charge. We are waiting for him to recover and then we will question everyone involved in the accident,” he said.

Lt Kraisorn said he had yet to question several people still in hospital recovering from injuries sustained in the accident.

“I have yet to talk to Mr Niphon Kaengin [the driver of the pickup truck involved in the accident], and I have yet to establish whether or not he is the father of Kullasatree Kaengin [the 8-year-old school girl injured in the crash].

Tuan Russala is now at Vachira Phuket, recovering from surgery to correct a ruptured spleen.

“He is now out of the ICU and recuperating in an internal patient room,” a nurse at the hospital told the Gazette.

Of the six survivors from the accident, 8-year-old schoolgirl Kullasatree remains under observation in the Intensive Care Unit (ICU) at Bangkok Hospital Phuket.

“I have yet to be informed of when she will be discharged from the hospital or moved to another unit within the hospital. It all depends on her doctor,” a nurse at Bangkok Hospital told the Gazette this morning.

Meanwhile, Niphon Kaengin, the driver of the pickup truck involved in the accident, is recovering at Phuket International Hospital.

“Mr Niphon is currently in the ICU. He underwent an operation at 3pm [yesterday] to stem internal bleeding in the abdomen. He is getting better. He is breathing unaided and is responding well to stimuli,” hospital staff told the Gazette.

The two other students in the pickup truck at the time of the accident – Aoithip Sanguanthip, 13, and Prapathip Pengsakul, 15 – suffered only minor scratches and bruises in the impact.

Regardless, both were rushed to Vachira Phuket Hospital in Phuket Town as a precaution.

“Prapathip was discharged from the hospital on the morning of the accident after receiving first aid,” a staffer at Vachira Phuket confirmed.

“Aoithip is under observation in the Neurosurgical Unit. She is responding well to stimuli and only has bruises to her body and minor wounds on her legs,” a nurse confirmed.

Makeesan Samae, the sole passenger in the van at the time of the accident, is also at Vachira Hospital. He reportedly suffered only minor injuries in the accident.

“He is now recovering in the Osseous [bone] Surgery wing at the hospital,” a nurse confirmed to the Gazette.

Phuket Airport bus forced off the road by repairs