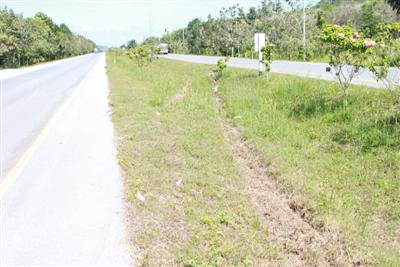 PHUKET: The reckless truck driver who killed four Swedish holidaymakers in Phuket as well as their Thai driver on Wednesday morning surrendered to police in Phang Nga yesterday.

Media access to the Narathiwat native was restricted by Khok Kloy District Police after he turned himself in at about 10am yesterday.

Despite the confession, Khok Kloy Duty Officer Capt Santi Prakobpran told the Phuket Gazette this morning that they still don’t know what caused Mr Muhummadyukee’s six-wheel truck to cross a median strip and crash head-on into a Toyota Altis driven by Wichit Phromluang, a 26-year-old from Udon Thani Province.

He has already confessed to police charges of reckless driving resulting in loss of life and property damage, Capt Santi said.

Police are still investigating whether he was under the influence of alcohol or fell asleep at the wheel, he said.

Mr Muhummadyukee, who fled the scene after the accident, surrendered himself after conferring with his employers at the Chotepatama Company.

He abandoned the company’s six-wheel refrigerated truck at the scene of the accident, which killed all five in the car instantly and ripped the axle off the front of the truck.

He was on his way to Phuket to collect a shipment of fish when the accident occurred, Capt Santi said.

Both vehicles are now on the grounds of Khok Kloy District Police headquarters, about five kilometers from the accident scene.

An examination of the Altis wreckage revealed that airbags had deployed.
Gazette reporters yesterday visited the accident scene, where tire tracks left by the truck were still clearly visible in the drainage ditch the truck crossed before hitting the Altis head-on.

A shirt, pair of shorts, blanket and some flowers were laid out at the scene where the Altis came to rest, presumably put there in memorial by relatives of the late Mr Wichit.

The accident, like ones before it, turned the Swedish media spotlight on the safety of Thailand as a tourist destination.

A report on the Swedish website Svenska Dagbladet listed Thailand and Turkey as the two tourist destinations with the largest number of Swedish fatalities in both 2009 and 2010.

The report quoted Swedish road safety expert Niklas Stavegård as saying that traffic conditions in Thailand “differ significantly” from those in Western Europe and North America.

“It runs a completely different way, with many pedestrians, mopeds and other kinds of vehicles, and they do not follow traffic rules in the way we are accustomed to here,” he said.

Karl von Schoultz of the Swedish Automobile Association advised Swedes in Thailand from getting behind the wheel until they had “been here a while” and were familiar with the “prevailing culture” on Thai roads.

“Sure there are traffic laws and police to enforce them, but the traffic culture is casual. They do not have the same respect for rules or the safety consciousness that we have at home, or in Europe,” he was quoted as saying in another report about the accident.