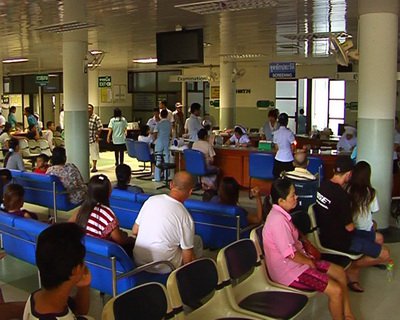 PHUKET: Floodwaters that crippled operations at Patong Hospital on Saturday were the worst the facility has experienced in ten years, the hospital director told the Phuket Gazette.

Patong Hospital Director Phumin Silaphan said operations were partially restarted after water was pumped from the basement over the weekend.

“Out-patient and emergency cases are now being accepted and there are many Thais and foreigners coming to the hospital now,” Dr Phumin said.

Electricity was connected through an adjacent building, but the second to fourth storeys were still in the dark, he explained.

The hospital currently has only three in-patients after transferring the rest to other Phuket facilities on Saturday. Normal operations including dentistry and laboratory work will not resume until maintenance is conducted on its generator.

“The generator has to be checked and fixed first. It’s uncertain whether it can be restored to the same working order as before the flood,” Dr Phumin said.

“Patong Hospital has about 400 patients a day, of which about 25% are foreigners, most involved in traffic accidents.”

On Saturday, Dr Phumin explained that even with a reliable electrical supply, the earliest Patong Hospital could hope to return to full operations was Wednesday.