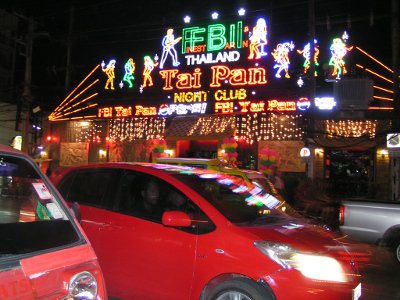 PHUKET: A German man is in intensive care fighting for his life after he was beaten by a mob of Phuket tuk-tuk drivers for refusing to pay a fare of 200 baht (approx US$6.70).

Kathu Police Duty Officer Teerasuk Boonsang told the Phuket Gazette that he was called to the scene, near the junction of Soi Bangla and Rat-U-Thit 200 Pi Road in Patong, at 11pm on Thursday.

The victim, Kurt Trotnow, 53, and his wife took a tuk-tuk from Aroonsom Plaza to the Tai Pan nightclub, Capt Teerasuk said.

The journey is about 800 meters along the southbound Rat-U-Thit 200 Pi Road.

“When they arrived, the driver charged them 200 baht, but Mr Trotnow insisted on paying only 100 baht,” said Capt Teerasuk.

The maximum fare to be charged by tuk-tuks within Patong is 200 baht, as set by the Patong Taxi Federation in February.

“They had an argument, and Mr Trotnow pushed the driver down onto the road and walked away,” said Capt Teerasuk.

“They happened to meet a brother of Mr Trotnow’s wife. The brother operates a motorcycle taxi there and he tried to help by offering to pay 100 baht of the fare, but Mr Kurt didn’t agree,” he said.

The couple then started walking back towards Aroonsom Plaza when they were set upon by a gang of men.

Some of the attackers reportedly kept kicking Mr Trotnow while he was on the ground, then ran away, Capt Teerasuk said.

Mr Trotnow was taken to Patong Hospital, then transfered to Vachira Phuket Hospital in Phuket Town where doctors did an emergency operation to stem bleeding in the brain.

A nurse at the ICU today told the Gazette that Mr Trotnow had not regained full consciousness.

“He can open his eyes sometimes, but he still needs a respirator, and he still has some bleeding in the brain,” the nurse said.

Capt Teerasuk said the investigation was floundering due to lack of detailed information.

“Mr Trotnow and his wife were very drunk. I questioned his wife but she could not remember the face of the tuk-tuk driver or even remember what happened that night,” he said.

CCTV has been of little help.

“The CCTV cameras at Soi Bangla are too far from the scene. The dark and the rain at the time of the incident makes it very difficult to make anything out of the footage.

“I am now checking with the CCTVs of restaurants around there to see if any other cameras recorded the attack,” he said.

Capt Teerasuk highlighted the importance of being able to identify the attackers.

“If they [Mr Trotnow and his wife] cannot remember what happened, or remember any of the attackers’ faces, we will not be able to charge anyone for this,” he said.