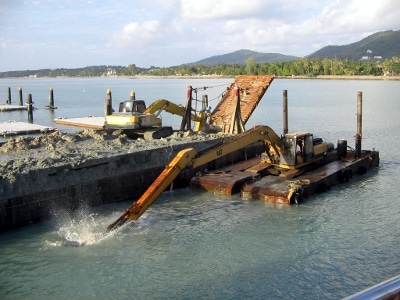 PHUKET: Phase two of the construction of the new Chalong Marina is well underway and scheduled for completion in September 2011. Officials say the opening of the new marina should help reduce drug trafficking in Phuket.

Project work is being carried out jointly by Golden Plan Co Ltd and Prommitr Co Ltd.

Phase one of the project saw construction of port facilities, quays, and a waste-water treatment pool. Completed in 2007, the work was within the 70-million-baht budget.

The second phase, begun in September last year with a 235-million-baht budget, includes the construction of the passenger terminal, immigration and customs offices and a Thai Marine Department office.

The marina will have docking space for 50 yachts up to 30 meters in length.

Officials are optimistic the facility will play an important role in reducing drug trafficking problems in Phuket.

The marina will serve as the main check-in point for visiting sailors, all of whom will need to clear Customs and Immigration before going ashore.

“As a government authority, we have to admit that current operations are not 100% efficient. Presently, tourists freely enter at other ports and report their arrival later,” said Phuripat Theerakulsiput, chief of Marine Office 5 Phuket.

“We have to ask all marinas in Phuket to submit lists of yacht traffic, both coming and going. It is international standard that travelers entering a country through a port facility need to check in with Immigration first. Once we open Chalong Marina, we can enforce regulations and make sure everything goes according to the law,” he said.

However, the project does have its difficulties, including the complicated work of breakwater construction.

“Chalong Bay is a closed area suitable for marina construction, but it needs to be built according to international standards. According to the specifications for marina development, wave heights inside should not exceed half a meter. But during the the monsoon season, wave heights sometimes exceed one meter. It would be dangerous without the breakwaters,” he said.