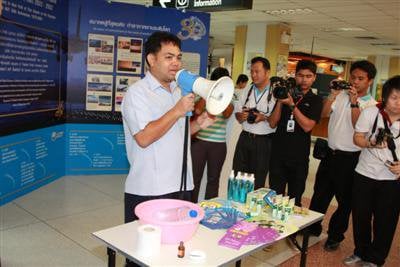 PHUKET CITY: A university student who died of pneumonia at Vachira Phuket Hospital on Thursday was infected with the A(H1N1) virus that causes swine flu, lab results have confirmed.

He was a native of Phattalung province.

The lab results were released by the government-run Phuket Medical Science Center in Thalang on Monday, Dr Pongsawas said.

Like most other people who have succumbed to the virus in Thailand, the boy had a pre-existing medical condition and his mother said he was ‘chronically ill’.

He had also recently been treated in a hospital in Haad Yai for a broken leg, the cast for which was removed just a few weeks ago.

These factors may have weakened his immune system and made him vulnerable to the virus, the mortality rate for which is less than 0.5 per cent of those who are infected.

The cause of death was listed as a secondary bacterial infection in the boy’s lungs.

Three roommates who shared an apartment with the teenage swine flu victim have been ordered to report daily to the Phuket Provincial Health Office.

After four days neither had tested positive for A(H1N1).

Dr Pongsawas said this was the only case of A(H1N1) infection reported at PSU.

An investigation into the student’s death suggests he may have contracted the virus at a nightclub, he said.

The boy died about 3pm on Thursday after a four-hour effort by doctors to treat him with antiviral drugs and a respirator failed.

The student had visited a private hospital early last week complaining of a slight fever.

He was given medication and a follow-up appointment was made.

At 1pm on Thursday, friends found him in his dorm room. He was conscious but extremely lethargic and was having difficulty breathing.

The friends rushed him to Vachira Phuket Hospital, but doctors were unable to save him.

Nationwide, the Ministry of Public Health is now reporting 11 fatalities and 156 new cases, of which 82%  are students.

Woman killed by truck in Phuket