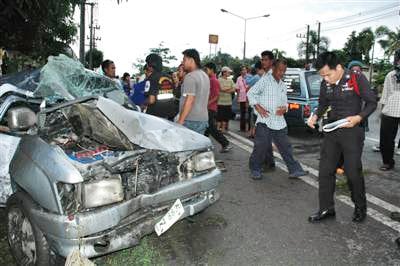 MAI KHAO, PHUKET: A young woman died instantly on Tuesday afternoon when a pickup truck slammed into her motorbike as she tried to cross the busy Thepkrasattri Road.

Sirintip Jongjalern, 26, was on her way home from work at Blue Canyon Country Club (BCCC) when she pulled onto Thepkrasattri Road in Thalang and into the path of a fast-moving Toyota Hilux pickup.

The driver, 22-year-old Sophon Janlap, was unable to avoid slamming into her.

Her body was hurled 20 meters away from her bike.

After slamming into the victim, the pickup careered into an electricity pole.

With his pickup extensively damaged, Mr Sophon fled the scene on foot.

Mr Sophon, who later surrendered himself at Thalang Police Station, has been charged with causing death by dangerous driving.

Ms Sirintip lived in Tambon Srisoonthorn with her spouse and four-year-old child.

A native of Chiang Rai, she was a member of the housekeeping staff at BCCC.

Bathing rites for the deceased are being held at Wat Srisoonthorn, where a cremation ceremony will take place on Sunday.