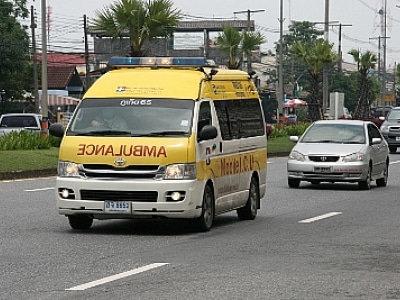 PHUKET: Staff at Phuket International Hospital and officers from the Phuket City Police Traffic Division are working together to come up with viable routes for ambulances to make sure they can get patients to the facility in an emergency during rush hour.

The news follows project contractor Italian-Thai Development Co’s placement on Friday night of concrete blocks on the inside lanes of the north side of the Darasamuth Intersection so that work on the 600-million-baht underpass can begin.

“We are seriously concerned about the underpass roadwork causing delays in ambulances reaching the hospital during rush hour,” a senior manager at Phuket International Hospital told the Phuket Gazette.

“This is a big issue. We have to ensure direct access to the hospital while the underpass is under construction. We have two ways that ambulances can bring patients: the bypass road [Chalermprakiat Ror IX Road], where the construction is, and Bang Yai Road [which runs behind the hospital and the Big C shopping center].”

“This is an important issue that we have to handle. The Phuket Highways Office and Italian-Thai Development Co have already consulted us on coming up with a solution.

“We must add more traffic police officers to regulate traffic flow through the junction during the construction,” he said.

“Also, people should learn which routes to take in order to avoid adding to traffic congestion at the intersection by using other roads instead,” he added.

(Click here to see a large map of the area and suggested alternative routes.)

Narongrit Havarungsi, Director at Bangkok Hospital Phuket, told the Gazette that his staff were monitoring the effect the underpass roadwork is having on traffic in the area and ambulance response times, but at this stage – and due to the hospital’s location – we’re not considering the issue critical.

“We are keeping an eye on how the traffic will affect us in case it becomes an issue in the future. However, we are not overly concerned at this stage and have yet to adjust any operational policies related to this,” he said.