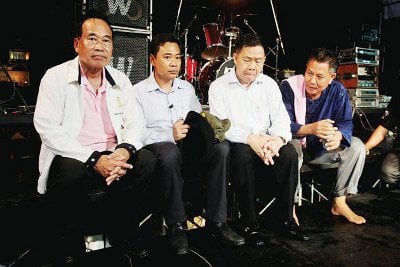 PHUKET: General Boonlert Kaewprasit, the leader of the Pitak Siam anti-government protest in Bangkok, admitted to his “loss to evil” after calling off the rally yesterday evening.

Retired General Boonlert Kaewprasit said he called off the protest because the number of participants was smaller than expected. He blamed this on efforts by authorities and police to prevent many prospective protesters from taking part.

He did not want the protesters to risk “further violence” at the hands of police following clashes between the two sides.

Police estimated the number of protesters at 20,000, while organizers put the figure at 50,000. Earlier, Gen Boonlert had vowed that his protest would draw 1 million people.

Gen Boonlert, leader of the Pitak Siam group, said that all over the country, supporters of the protest were blocked from travelling along the main roads to Bangkok, such as Phetchakasem, Sukhumvit and Phaholyothin.

He also said he was concerned about the well-being of protesters at the Royal Plaza and in adjacent areas after police fired several tear-gas canisters at them. He added that signs that bullets had been fired were also found at the protest site.

Gen Boonlert said he would not lead such a street demonstration again and that it would depend on others in the anti-government movement whether there would be a new leader.

“General Boonlert is already dead. I have lost to evil,” he said in an emotional announcement on the protest venue’s main stage under heavy rain.

He added that the protesters who were arrested during yesterday’s clash with police would get legal assistance.

At least 117 protesters – 94 men and 23 women – were being detained at the Border Patrol Police Region 1 headquarters in Pathum Thani yesterday, according to Pol Lt Gen Nares Nanthachot, commander of Police Region 1.

Many protesters became angry after hearing Gen Boonlert’s announcement calling an abrupt end to the protest. Some of them shouted that they would not join him in future protests. Some angry rain-soaked protesters threw things at crowd-control police nearby.

Observers said the organizers’ lack of experience in holding large protests was the main cause for the premature end of the anti-government rally.

“It’s clear that Pitak Siam has no experience, when compared to the People’s Alliance for Democracy or the red shirts,” said Senator Somchai Sawaengkarn.

A source said the early end of the protest could be due to a lack of funding and psychological warfare by the authorities, as well as poor management on the organizers’ part.

Meanwhile, the government was likely to consider lifting the Internal Security Act soon, now that the protest had been called off, according to PM’s Office Minister Varathep Ratanakorn.