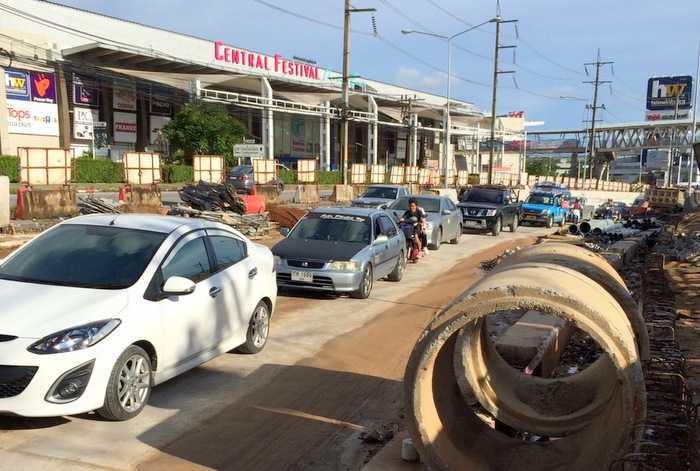 PHUKET: The northbound lane above the 600-million-baht underpass beside the Central Festival Phuket shopping mall has been closed so workers can repave the road.

With the lane closed for repaving, motorists heading east past Central Festival can no longer turn left
onto the bypass road.

Likewise, motorists heading west past Surakul Stadium can no longer turn right onto the bypass road.

“We suggest that other motorists use Bangyai Road behind the Big C shopping center while we complete the construction, which is expected to be done by October 20,” Mr Samak said.

“After the northbound lane has been resurfaced, we will re-open it to traffic – but then we will close the southbound lane so we can repave that section.”

Narong Horee, project manager at construction contractor Italian-Thai Co Ltd, explained that the scheduled deadline for completion of the underpass – originally slated for this month – had been pushed back to March next year.

“We were granted an extension of 150 days after the minimum wage was raised to 300 baht a day [under Prime Minister Yingluck Shinawatra, story here],” he said.

Regardless, Mr Samak said he was pushing for the intersection to be fully open by early November.

“I will push the constructors to get it done as soon as possible. We must finish the underpass before the Asian Beach Games begin in November [story here],” he said.

“We apologize for any inconvenience. As soon as the project is finished, it will help relieve traffic congestion a lot.”