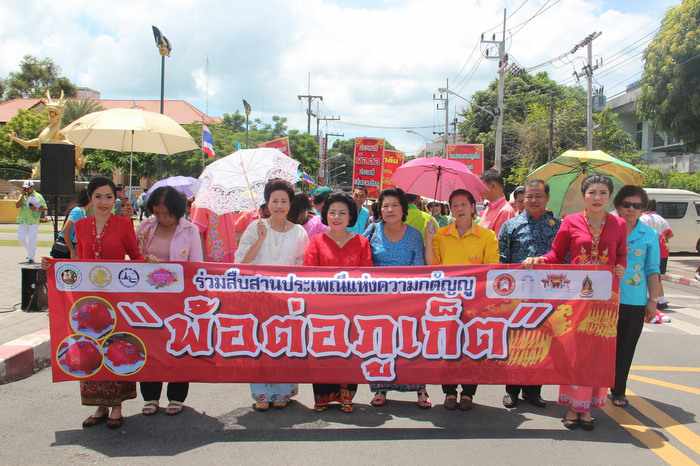 PHUKET: Phuket Town launched into the annual Por Tor Festival today with a parade through the city streets followed by merit-making ceremonies and other activities in the heart of the island.

Phuket is honoring its Chinese cultural roots by celebrating the festival, more widely known as the Hungry Ghost festival, during which a variety of cultural displays and activities will be available for residents and tourists alike to enjoy.

“The parade started today from Queen Sirikit Park on Thalang Road at 11:30am. It proceeded down Thalang Road, Phuket Road and along Rassada Road before reaching its final destination of the municipal market on Ranong Road,” said Phuket City Mayor Somjai Suwansupana.

The two biggest days of the festival are today and tomorrow, said Mayor Somjai, and activities will take place mainly at the market.

“The Por Tor Festival is a Phuket tradition that has been passed down for many generations. Chinese people believe that worshiping their ancestors will bring them luck, as well as longer and healthier lives,” she said.

“About 300 people took part in the festivities today,” she said.

There were many red turtles on display, Chinese sweets called Ang Ku, said Mayor Somjai. The color red is for good luck and the turtles are a symbol of longevity.

Festivities will be held throughout Phuket for the entirety of the festival, which will run until August 24.

“On August 14, another big procession will begin at 5pm at Queen Sirikit Park and end at Bang Neaw Shrine, which is also known was the Por Tor Kong Shrine,” said Mayor Somjai.