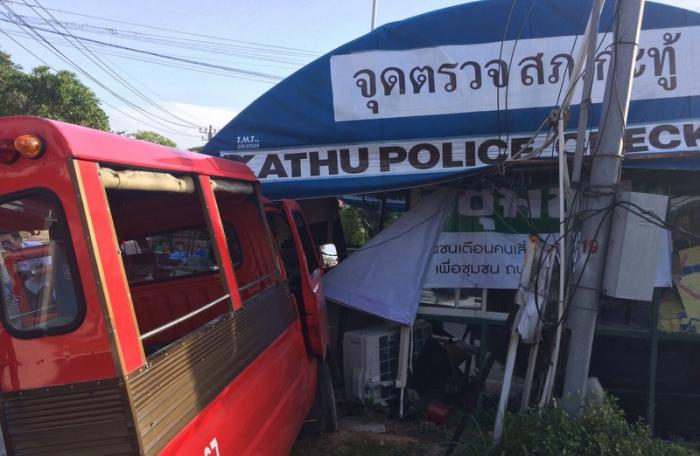 PHUKET: A tuk-tuk driver sustained serious injuries after crashing into a police box situated atop a median in Kathu this morning.

The accident occurred at about 8am near the Kathu-Patong junction, on the way down from Patong Hill.

The driver had no identification documents with him, but police believe his name is Faad Yayi, aged between 70-80 years. They also suspect that he might have fallen asleep at wheel before the crash occurred.

Rescue workers rushed to the scene to find the driver still stuck inside and covered in blood.

“Rescue workers had to use hydraulic rescue tools to separate the tuk-tuk from the median and remove Mr Faad from the damaged vehicle. He was severely bruised, but conscious. However, he was too confused to tell us anything coherently,” said Lt Sawanya Eiattrong of Kathu Police.

Mr Faad was rushed to Patong hospital, while his tuk-tuk was moved to Kathu Police Station.

“We have yet to learn the cause of the crash. The most likely explanation is that he was asleep at the wheel or under the influence. We will test his blood alcohol level and question him before pressing charges. Luckily, there were no passengers on board at the time of the accident” said Lt Sawanya.

Earlier this month, a 21-year-old university student was killed when a taxi driver fell asleep at the wheel and crashed his vehicle into her motorbike in Thalang (story here).